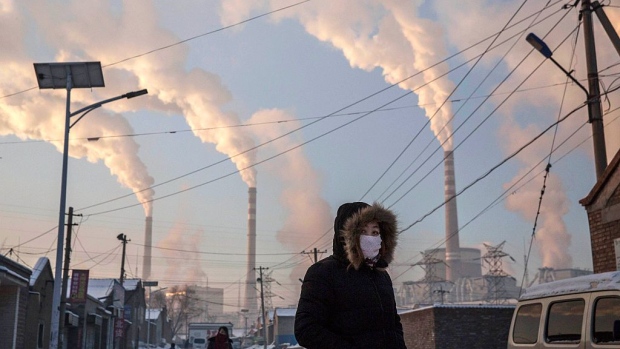 SHANXI, CHINA -NOVEMBER 26: (CHINA, HONG KONG, MACAU, TAIWAN OUT) Smoke billows from stacks as a Chinese woman wears as mask while walking in a neighborhood next to a coal fired power plant on November 26, 2015 in Shanxi, China. A history of heavy dependence on burning coal for energy has made China the source of nearly a third of the world's total carbon dioxide (CO2) emissions, the toxic pollutants widely cited by scientists and environmentalists as the primary cause of global warming. China's government has publicly set 2030 as a deadline to reach the country's emissions peak, and data suggest the country's coal consumption is already in decline. The governments of more than 190 countries are expected to sign an agreement in Paris to set targets on reducing carbon emissions in an attempt to forge a new global agreement on climate change. (Photo by Kevin Frayer/Getty Images) Photographer: Kevin Frayer/Getty Images AsiaPac , Photographer: Kevin Frayer/Getty Images AsiaPac

(Bloomberg) -- Global electricity produced from burning coal slipped 3% last year as more countries shifted to cleaner fuels, but the number of power plants grew for the first time since 2015 because of a boom in China.

About 68 gigawatts of coal plants opened last year, offsetting the roughly 34 gigawatts that retired. Almost two-thirds of the new capacity was installed in China, according to a report from environmental groups including the Sierra Club and Greenpeace International.

The findings show that international pressure to slow use of the dirtiest fossil fuel is having a limited impact in Asia even as coal declines in the U.S., where generation dropped 16%, and in Europe, where it slumped 24%. While coal generation fell 3% in India, almost 80% of the new plants under construction were in Asia.

“Though coal is still advancing in some Asian countries, the rest of the world is clearly seeing an overall decline in the coal fleet,” Gyorgy Dallos, global strategist for Greenpeace, said in a statement.

The report, Boom and Bust 2020: Tracking the Global Coal Plant Pipeline, was also produced by Global Energy Monitor and the Centre for Research on Energy and Clean Air.