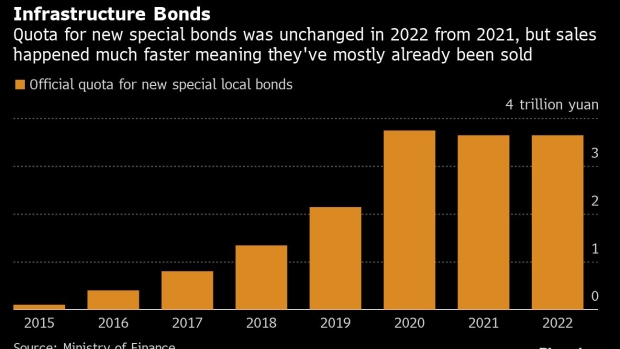 (Bloomberg) -- China’s Ministry of Finance is considering allowing local governments to sell 1.5 trillion yuan ($220 billion) of special bonds in the second half, an unprecedented acceleration of infrastructure funding aimed at shoring up the country’s beleaguered economy.

The bond sales would be brought forward from next year’s quota, according to people familiar with the discussions, who asked not to be identified because they aren’t authorized to speak publicly. It would mark the first time the issuance has been fast-tracked in this way, underscoring growing concerns in Beijing over the dire state of the world’s second-largest economy.

Previously local governments didn’t start selling the debt until Jan. 1, when the new budget year begins. The proposal to adjust that timeline would therefore need to be reviewed by the State Council and might also need approval from the country’s legislative body, the National People’s Congress.

The debt would mostly be used to pay for infrastructure spending, an old playbook that policy makers are using to boost an economy hit by Covid lockdowns and a housing slump. The funding would add to 1.1 trillion yuan in new support for infrastructure announced over the past few weeks, as Xi Jinping’s government tries to get the economy back on track toward achieving its annual growth target of around 5.5%.

China’s Ministry of Finance and the National Development and Reform Commission didn’t immediately respond to faxed requests for comment.

Each year local governments receive a quota for how many general and special bonds they can sell. Until 2018 provinces and cities would wait for the NPC meeting in March to officially approve that quota before they started selling the bonds, meaning the money wouldn’t be spent until much later in the year.

From 2019 onwards, the central government began issuing the quotas earlier so local authorities could start selling the debt as soon as possible after the new year began. In December last year, the Ministry of Finance said it had already issued almost 1.5 trillion yuan worth of 2022’s quotas, and then pushed for all 3.65 trillion yuan worth of bonds to be sold quickly and used this year.

By the end of June, most of those bonds were sold, meaning there’s space in the second half of the year to sell more debt if the government wants to.

In 2018, the NPC allowed the State Council to start granting some of the following year’s bond quotas early but didn’t mention the timing of sales. That means allowing the use of 2023’s quota this year may need the approval of the NPC first, possibly at one of the regular meetings of its standing committee.

Separately, the NDRC, the country’s top economic-planning body, is asking regional authorities to submit plans for projects for 2023 as early as possible, people with knowledge of the matter said.

The government’s growth target for 2022 is looking increasingly challenging amid Covid resurgences and a property downturn. Economists surveyed by Bloomberg forecast the economy will grow 4.1% this year.