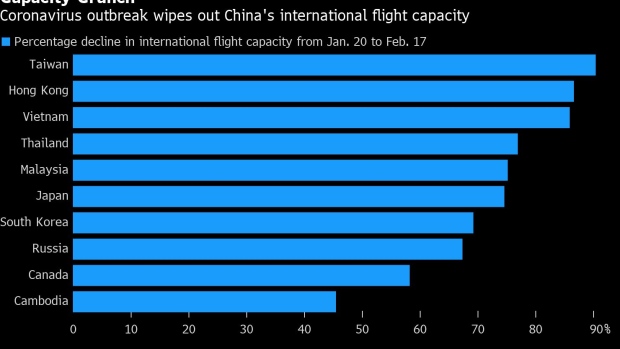 (Bloomberg) -- China is considering measures such as direct cash infusions and mergers to bail out an airline industry crippled by the coronavirus outbreak, according to people familiar with the matter.

One proposal involves allowing some of the nation’s biggest carriers -- which are controlled by the state -- to absorb smaller ones suffering the most from the collapse of travel, the people said, asking not to be identified because the information hasn’t been discussed publicly. Another option being explored is for the government to inject billions of dollars to bail out the industry, they said. Discussions are ongoing, and no decision has been made on what the final bailout package will look like, they said.

The airline industry, particularly in China, has been roiled by the epidemic after the virus was first detected in the city of Wuhan. In an unprecedented move, global carriers stopped about 80% of their China flights and local airlines grounded enough planes to carry 10.4 million passengers, reducing China to a smaller international aviation market than Portugal, according to industry researcher OAG Aviation Worldwide.

Last week, the Civil Aviation Administration of China said the government would support measures to help the beleaguered industry recover, including mergers, but the regulator didn’t provide details. The government already announced plans to lower taxes and fees for airlines.

The press office at State-owned Assets Supervision and Administration Commission, which oversees key state enterprises such as major airlines, said it isn’t aware of any such bailout being planned. CAAC, the regulator in charge of airlines, didn’t immediately respond to a request for comment.

China’s aviation market, projected to overtake the U.S. this decade and become the world’s biggest, now ranks 25th, according to OAG. China Southern Airlines Co. scrapped about 45% of flights in late January and early February, the highest rate among the nation’s top carriers, followed by Air China Ltd. and China Eastern Airlines Corp., according to Citigroup Inc. research.

The pain has spread to Hong Kong-based Cathay Pacific Airways Ltd., which warned Monday that first-half financial results will be “significantly down” from a year earlier. Sales from Hong Kong and China have accounted for about half of its total revenue.

--With assistance from Sarah Chen and Ken Wang.

To contact Bloomberg News staff for this story: Steven Yang in Beijing at kyang74@bloomberg.net