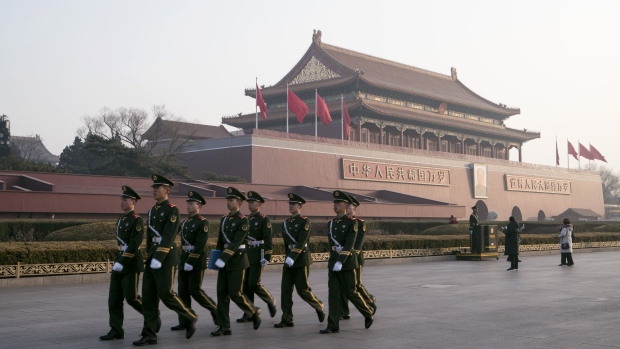 Members of the Chinese People's Armed Police march along Tiananmen Square in Beijing, China, on Monday, March 4, 2019. National People's Congress spokesman Zhang Yesui said at a briefing on Monday that China would need to increase its military spending to protect itself and that it doesn't pose a threat to other countries. Photographer: Giulia Marchi/Bloomberg , Bloomberg

(Bloomberg) -- China is considering delaying its most high-profile annual political meeting for the first time in decades, as the government attempts to contain an outbreak of a deadly new strain of coronavirus.

The Standing Committee of the National People’s Congress will meet Feb. 24 to consider a delay of the annual meeting of the full parliament planned to convene March 5, the official Xinhua News Agency said Monday.

Some 3,000 members of China’s rubber-stamp parliament, the National People’s Congress, were expected to convene in Beijing for about two weeks of meetings attended by President Xi Jinping and other top leaders. The annual political pageant also includes meetings by the Chinese People’s Political Consultative Conference, an advisory body made up of around 2,000 representatives from companies, ethnic minorities, cultural organizations and other groups.

--With assistance from Peter Martin and Jon Herskovitz.