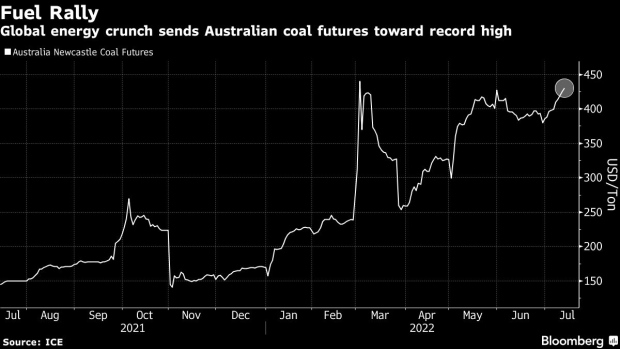 The Newcastle Coal Terminal in Newcastle, New South Wales, Australia, on Friday, May 6, 2022. A coal-mining community that has elected the same political party for more than a century could decide Australia’s next government this month in an election that has divided the nation over how to battle climate change. , Bloomberg

(Bloomberg) -- Chinese bureaucrats studying the energy outlook are proposing to end a near two-year ban on Australian coal as tensions begin to ease and on concerns supply may tighten when Western-led sanctions on Russian energy kick in.

The proposal will be submitted to senior leaders, with a recommendation Beijing resume Australian imports prompted by fears European-led curbs on Russian energy will increase competition for coal from China’s main suppliers like Indonesia, according to people familiar with the plan. Officials are looking to boost fuel supplies to avoid a repeat of last year’s power disruptions -- particularly ahead of a key party congress -- said the people, who requested anonymity to discuss a private matter.

The plan will be handed to leaders who are in a position to authorize any change in policy to make a final decision, the people said. Some companies are already preparing to resume imports, according to two other people.

China -- which used to be a major consumer of Australia’s coal -- implemented an unofficial ban in late 2020 as hostilities between Canberra and Beijing escalated over a decision to bar Huawei Technologies Co. from building a 5G network, and after then-Prime Minister Scott Morrison led calls for an independent probe into the origins of the coronavirus.

Australian Foreign Minister Penny Wong and Chinese counterpart Wang Yi met Friday for the first talks between top diplomats from the two nations since 2019. China is willing to work to get relations back on track, Wang said in a statement.

Beijing’s plans are also a response to decisions by coal consumers including the European Union, Group of Seven nations and Japan to ban Russian imports as soon as this year. The moves are adding pressure on global markets just as demand for the dirtiest fossil fuel booms with tight supplies across the energy complex. While Beijing hasn’t adopted sanctions, the ban will intensify competition between China and other buyers for Indonesian coal, China’s top supplier, the officials said.

Asia’s benchmark Newcastle coal surged to a record last month amid intense competition for a dwindling pool of available cargoes. A brutal heatwave has also turned deadly across large swathes of China, with officials starting to curtail power to factories to ease the strain on the grid and prevent power shortages.