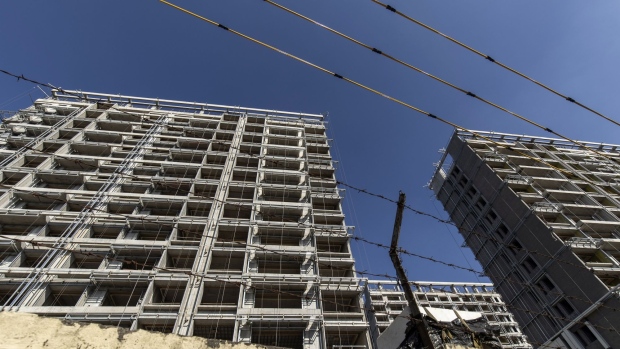 (Bloomberg) -- Chinese regulators are considering lifting some restrictions on developers’ access to cash from presold properties tied up in escrow accounts, according to people with knowledge of the matter, a potentially major step toward easing the industry’s liquidity crunch.

Regulators including the housing ministry and the banking watchdog are still discussing details and may convey the instructions through window guidance to local governments later this month, said the people, asking not to be identified because the talks are private. Authorities are contemplating a package of policies to prevent a deepening of the real estate crisis, one of the people said.

The Ministry of Housing and Urban-Rural Development and the China Banking and Insurance Regulatory Commission didn’t immediately reply to requests for comment.

Regulators are fine-tuning their long-running crackdown on the property sector after a credit crunch at China Evergrande Group and other junk-rated developers began spreading to higher-rated peers. A property-led slowdown in the economy has pushed policy makers into easing mode, with the central bank cutting interest rates this week and pledging to open its policy tool box wider.

Beijing is keen to stabilize growth in a crucial year of leadership transition as challenges mount from spreading omicron outbreaks to the continued slump in property sales and investment.

Developers’ dollar bonds also advanced. Country Garden Holdings Co.’s 6.5% note due 2024 headed for a record gain, rising 14 cents on the dollar to 92.4 cents, according to Bloomberg-compiled prices. The bond of China’s biggest developer closed at a record-low 70 cents on Monday.

When Chinese real estate companies sell residential properties before construction is completed, they’re required to deposit the proceeds in supervised bank accounts. That’s to prevent cash-strapped builders from abandoning projects or directing funds for other uses.

Proceeds from home sales generally make up more than half of developers’ cash inflows, according to calculations based on official data. Cinda Securities Co. estimates about 1.6 trillion yuan ($252 billion) may be held in such escrow accounts nationwide, assuming local governments ask developers to keep 30% of residential projects’ value there.

Some local authorities have already made moves to ease presale restrictions.

Yantai city in eastern Shandong province on Tuesday allowed the highest-rated developers to withdraw a bigger portion of funds from supervised escrow accounts, according to a notice on the municipal government’s website. Developers should first use the additional funds to pay migrant workers, it said.

In Chengdu, the capital of the southwestern province of Sichuan, the local government said in November that developers will be able to use proceeds from presales if they meet certain construction progress.