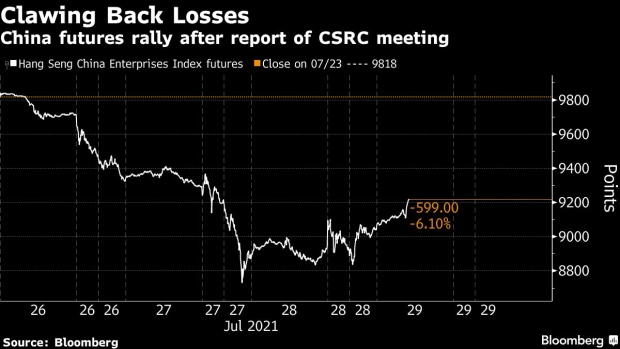 The hastily arranged call, which included attendees from several major international banks, was led by China Securities Regulatory Commission Vice Chairman Fang Xinghai, people familiar with the matter said, asking not to be named discussing private information. Some bankers left with the message that the education policies were targeted and not intended to hurt companies in other industries, the people said.

It’s the latest sign that Chinese authorities have become uncomfortable with a selloff that sent the nation’s key stock indexes to the brink of a bear market on Wednesday morning. State-run media have published a series of articles suggesting the rout is overdone, while some analysts have speculated government-linked funds have begun intervening to prop up the market.

China’s CSI 300 Index rebounded from early losses on Wednesday to close with a 0.2% gain. Banks, viewed as prime targets for intervention because of their heavy weightings in benchmark indexes, were among the biggest contributors to the advance.

Wednesday’s reprieve followed a three-day plunge that erased nearly $800 billion of Chinese equity value, spilling over into everything from the yuan to the S&P 500 Index and U.S. Treasuries during one of its most extreme phases on Tuesday.

The losses were triggered by China’s shock decision to ban swathes of its booming tutoring industry from making profits, raising foreign capital and going public. It was the government’s most extreme step yet to rein in companies it blames for exacerbating inequality, increasing financial risk and challenging the Communist Party’s grip on key segments of the economy.

Chinese authorities have a long history of attempting to smooth swings in domestic markets, though their efforts have had mixed success in recent years. They’re taking action now after the plunge in U.S.-listed tutoring companies like TAL Education Group and New Oriental Education & Technology Group Inc. spread to nearly every corner of China’s onshore equity market.