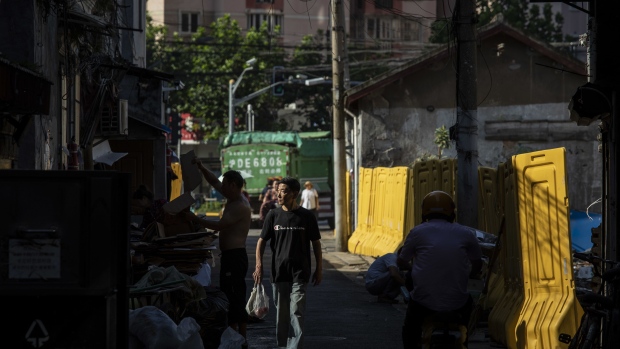 Residents walk through an older neighborhood near houses undergoing demolition in Shanghai, China, on Monday, Aug. 30, 2021. Chinese President Xi Jinping chaired a high-level meeting that “reviewed and approved” measures to fight monopolies, battle pollution and shore up strategic reserves, all areas that are crucial to his government’s push to improve the quality of life for the nation’s 1.4 billion people. Photographer: Qilai Shen/Bloomberg , Bloomberg

(Bloomberg) -- China’s budget will likely be in or near balance for the first time in roughly four decades, a sign of tight fiscal policy during the year despite a slowing economy, according to a study from the East Asian Institute.

Government revenue and expenditure in the first seven months of the year were nearly perfectly balanced, and if the trend continues, it’ll mark the first time since 1985 that’s happened, Christine Wong, a visiting research professor at the EAI at the National University of Singapore, wrote in a paper.

That’ll also make China an outlier among major economies in the world, all of which are running unprecedentedly loose fiscal policies to mitigate the economic damage of the pandemic, she wrote.

Government revenue has exceeded the budgeted level by nearly 20% through the first seven months of 2021, Wong said, citing finance ministry data. However, most major expenditures have been slashed compared to 2019 levels, including a 36% decline in environmental protection expenditures, one of the government’s key policy priorities. The only three spending categories that have significantly increased during the period are health, social security and employment, and debt service, according to the paper.

While it remains unclear whether this fiscal policy tightening is the result of a deliberate choice, it could worsen the fiscal stress facing China’s local governments and further crimp their delivery of services, Wong said. There have been anecdotal reports confirming that local governments are facing pressures to cut spending, such as an inability to pay civil servants and teachers in full.

Local governments in China have more than doubled bond sales to roll over maturing debt this year, helping to ease their repayment risk. At the same time, they have slowed the pace of special bond sales used to finance spending on infrastructure like highways and houses, delaying the boost from infrastructure investment this year.