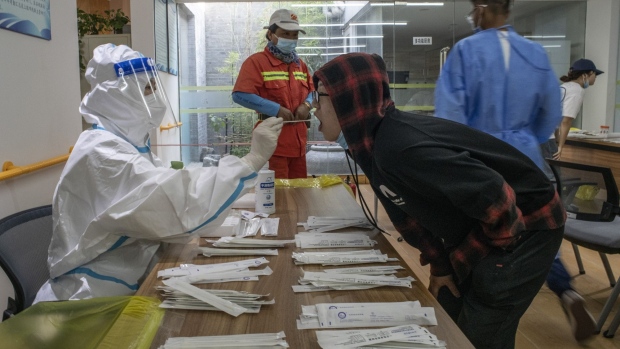 A healthcare worker in personal protective equipment (PPE) collects a swab sample from a resident at a Covid-19 testing facility in Beijing, China, on Wednesday, May 18, 2022. Fresh outbreaks around key Chinese cities and the ongoing Covid-19 spread in Beijing are raising the specter of more disruptive pandemic curbs, even as Shanghai slowly emerges from its six-week lockdown. , Bloomberg

(Bloomberg) -- China’s Covid outbreaks eased, though the threat of lockdowns remains as infections continue to be found in key cities.

Beijing reported 55 cases on Wednesday, down from 69 on Tuesday. The capital has locked down some areas of the Fengtai district for seven days and is starting three rounds of mass testing across four districts as authorities race to stamp out infections.

In nearby Tianjin, where an outbreak in January disrupted global auto giants Toyota Motor Corp. and Volkswagen AG, 33 new cases were found on Wednesday, down from 55 on Tuesday. Among measures announced late Wednesday to help stop the spread, two residential buildings in the city were put under lockdown and college entrance exams scheduled for Saturday postponed until June 12, CCTV reported.

Sichuan province reported 149 cases on Wednesday, compared with 201 on Tuesday. The national total fell to 1,016 cases yesterday from 1,227 on Tuesday.

Nevertheless, the continuing flareups underscore the challenges China faces in pursing Covid Zero, as well as the ever-present risk of disruptions that have already taken an enormous economic and social toll. The zero-tolerance approach is straining in the face of the highly transmissible omicron variant, with authorities turning to deploying harsh measures more extensively and frequently, including the unprecedented shutdown of Shanghai.

Shanghai cases fell to 719 on Tuesday from 855 on Tuesday. No infections were found outside of government quarantine for a fifth straight day.

However, many restrictions remain in place and swaths of the city’s population are still largely stuck inside their compounds. Residents must produce a pass to exit their compounds and can only leave by bike or on foot. The passes are distributed to each apartment by residential committees, allowing one person per family to leave during appointed hours for grocery errands. According to passes seen by Bloomberg News, many compounds will allow residents to leave twice in the next four days, for a maximum of four hours at a time.

Read more: My First Day Out of Shanghai’s Lockdown Was Far From Freedom

About 790,000 people in quarantined areas of Shanghai are still under the toughest restrictions that bans them from leaving their apartments, Zhao Dandan, deputy head of the city’s health commission, said at a media briefing Wednesday.

There are also few signs of any widespread re-opening for businesses. Many firms in Shanghai are still enforcing the closed-loop systems, where staff work and live on-site and undergo regular testing, that allowed them to operate during the lockdown.