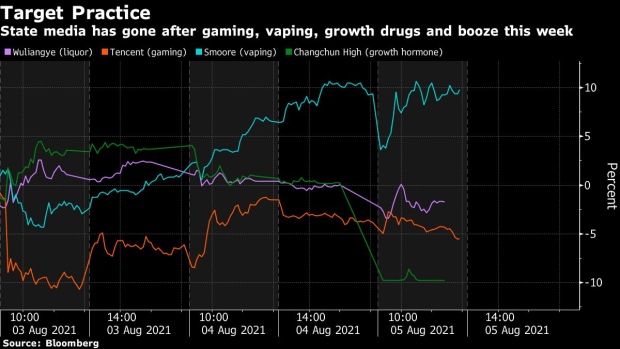 (Bloomberg) -- China’s liquor and e-cigarette stocks dipped Thursday as skittish investors seized on a series of reports from state media that could foreshadow the next targets for stricter regulation.

While the moves were mild compared to the recent routs in digital gaming and private education stocks, the gyrations underscore the policy risks running through markets.

Tobacco vaping stock Smoore International Holdings Ltd. dropped as much as 7.8% in Hong Kong before erasing the loss after a Xinhua report late Wednesday on the ability of adolescents to obtain e-cigarettes. Shenzhen Jinjia Group Co., which also makes e-cigarettes, fell as much as 5.1% and remained down 4.1% at 1:04 p.m. in Shenzhen.

“Confidence is shaky,” said Gu Xiangjun, an analyst at Capital Securities Corp. “Any negative news is quite poignant right now.”

Shares of liquor maker Kweichow Moutai Co. slipped as much as 2.8% while its peer Wuliangye Yibin Co. dropped 3.8% after People’s Daily affiliate China Fund News said investors were shaken after a government ministry posted an article online highlighting links between alcohol and cancer.

Beijing’s regulatory crackdown triggered a $1 trillion global selloff last month, leaving little room for error among investors trying to anticipate the next policy shift. Given the government’s concern about inequality and the importance of people getting a fair start in life, traders have become particularly sensitive to official commentaries that touch on the nation’s youth.

This saw the spotlight Thursday also turn to a Xinhua report about the harm from misuse of human growth hormone injections by parents who are anxious about their children’s height.

Amidst the angst though, some investors are looking for bargains in sectors that have found favor with policy makers.

The top two performers on the Hang Seng Index in the first three days of August are BYD Co. Ltd., an electric vehicle maker, and renewable energy products maker Xinyi Solar Holdings Ltd. They’re followed closely by Anta Sports Products Ltd., which has climbed back toward a record high.

The national effort to achieve carbon-neutral status and the government’s desire to improve people’s physical fitness has attracted some investors to green energy stocks and sports apparel makers.