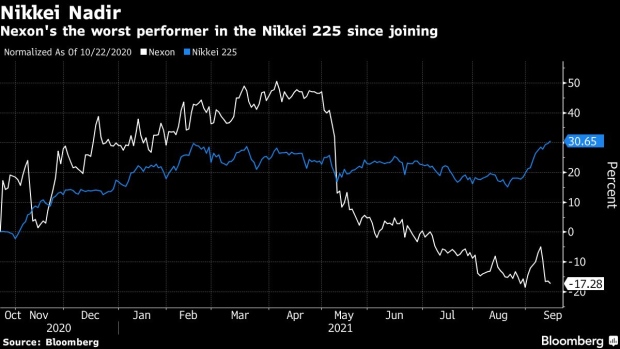 (Bloomberg) -- While the Nikkei 225 Stock Average has risen to a three-decade high, the tide hasn’t lifted all boats. Game maker Nexon Co. has been the worst performer since being added to the index last autumn.

Nexon shares initially surged when the firm joined the benchmark in October. But they’ve since sunk below their entry level to the blue-chip gauge and are now down 36% in 2021 -- buffeted by exposure to China’s crackdown on online gaming, a disappointing earnings outlook and skepticism over a purchase of Bitcoin near the cryptocurrency’s peak.

Nexon could be among the non-Chinese game makers squeezed most if officials in Beijing slow approvals of new games, Bloomberg Intelligence analysts wrote last week. Although listed in Tokyo for a decade, Nexon was founded by South Korean billionaire Kim Jung-ju and is led by American Owen Mahoney.

The firm gets about 27% of its revenue from China and only a fraction from Japan. The China crackdown on gaming has dented recovery, with the launch of the long-delayed Mobile Dungeon&Fighter in China not even included in its outlook for this quarter. Still, most analysts remain upbeat, with two-thirds rating the stock a buy, and none recommending sell, data compiled by Bloomberg show.

“In the near-term, stronger China game regulations should have only minor impact on Japanese game companies,” SMBC Nikko Securities Inc. analysts Eiji Maeda and Yasuki Yoshioka wrote in a Sept. 13 note, though they cautioned smartphone delays in China could hit growth.