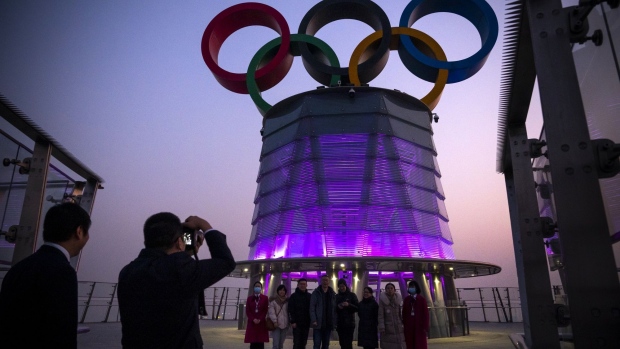 Visitors pose for photographs with the Olympic rings at the observation deck at the Olympic Tower in Beijing, China, on Friday, Jan. 7, 2022. Beijing said it will conduct the winter games in a so-called “closed loop”, with participants only allowed to move between Olympic venues and other related facilities, and to use designated transport services. , Bloomberg

(Bloomberg) -- China has kicked off fresh efforts to regulate online content, days before the start of the key Spring Festival holiday and Beijing Winter Olympics.

The Cyberspace Administration of China’s monthlong campaign will target web content that violates laws and punish related accounts and platforms to cultivate a “healthy” environment for Chinese New Year, it said in a statement Tuesday. The Beijing games are scheduled to commence on Feb. 4, coinciding with the week-long holiday that begins Jan. 31.

The regulator will crack down on online rumors, child pornography and “ill-natured” activities such as feudal superstition, it said. It also pledged to prevent celebrities who had engaged in illegal or unethical activities from taking part in entertainment shows and live broadcasting and monitor fan group accounts for “irregularities.”

The new initiative echoes earlier campaigns by Beijing to crack down on information deemed harmful to society or political stability. Over the past year, regulators have intensified efforts to regulate private enterprises and the technology industry over issues ranging from antitrust to data security and income inequality.

During a two-month campaign that began last August, it targeted commercial platforms and social media accounts over content that “bad mouths” its financial markets and policies. Beijing last year also fined giants like Tencent Holdings Ltd. and Alibaba Group Holding Ltd. over sexually suggestive content involving minors. And the government has also taken aim at so-called effeminate celebrities and what it regards as unruly fan culture.

Websites and internet platforms, as well as trending topics and key news, will be closely monitored so that “positive” information can be displayed, according to Tuesday’s statement. Illegal and ill-natured content will be dealt with in a timely manner, the CAC said.