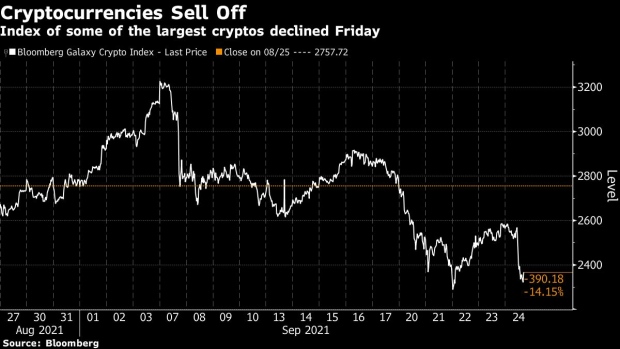 (Bloomberg) -- China’s declared ban on cryptocurrencies Friday ignited a debate on whether it’s part of the fight for acceptance of the unregulated asset class or something more debilitating.

A selloff of digital currencies commenced after China’s central bank said all cryptocurrency-related transactions were illegal, according to a Q&A statement on the People’s Bank of China’s website. Bitcoin, the largest digital coin, fell as much as 8.9%, while Ether lost near 13%. The Bloomberg Galaxy Crypto Index, a gauge of some of the most-prominent cryptos, lost as much as 11%.

“It’s the latest move in a multi-year clampdown on Bitcoin and cryptocurrencies,” said Antoni Trenchev, managing partner and co-founder of Nexo, a crypto lender. “For now, Bitcoin can’t catch a break. Bitcoin is being bombarded from all sides.”

“Though China’s move is particularly dramatic, it reflects on similar concerns regulators globally are sharing surrounding crypto market integrity and its role in illicit activity. Manipulation and fraud is not unique to crypto but, as a new asset class, digital assets present new challenges and have more to prove to regulators and the public.”

“Solana Summer is over, the Loot frenzy looks like a major peak for NFT (non-fungible token) mania, the El Salvador launch on September 7 was the ding dong high for BTC (predictably),” he wrote. “It will be interesting to see how crypto trades in Q4 in the face of reduced global monetary accommodation and a lack of fun stories. My guess is that crypto struggles for a while.”

“China has banned crypto at least a dozen times this year. The volatility we are seeing today may be a knee-jerk reaction by some, but most market participants have already priced a China ban in from the beginning of the summer.”

“If the headlines are just stronger wording ahead of China’s own digital currency, or if China is just reiterating it’s stance on mining, then there is no lasting effect here,” he said. “If, on the other hand, the crackdown affects key market infrastructure such as the major exchanges then the market volatility is set to increase further.”

“China ruling crypto transactions illegal would be disastrous for the cryptocurrency sector. Being excluded from the world’s largest market is terrible for any product, and this is the strongest demonstration yet of China’s anti-crypto sentiment,” Monaghan said. “However, this isn’t the first time China has threatened action, and, thus far, it has failed to follow through. The next few weeks will be rough for crypto markets that were already on edge after the SEC’s recent comments, but only actual legislation will have a long-term effect.”

“Veteran traders are conditioned to shrug off bad news from China and buy the dip, but could this time be different? There are a few reasons to think so,” including China’s tech crackdown, as well as its pursuit of its digital yuan, among other factors.

Read more: How Bitcoin Is Edging Toward the Financial Mainstream: QuickTake