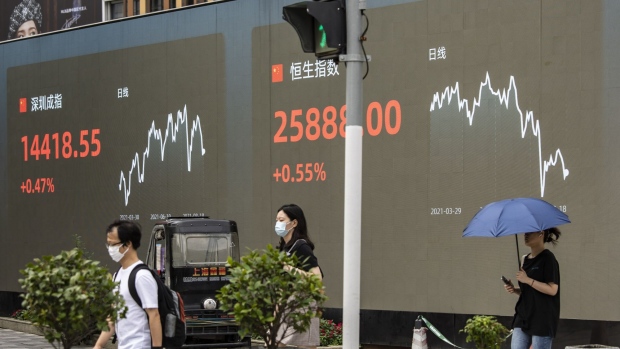 Pedestrians walk past a public screen displaying the Shenzhen Stock Exchange and the Hang Seng Index figures in Shanghai, China, on Wednesday, Aug. 18, 2021. President Xi Jinping said China must pursue "common prosperity," in which wealth is shared by all people, as a key feature of a modern economy, while also curbing financial risks. Photographer: Qilai Shen/Bloomberg , Bloomberg

(Bloomberg) -- China’s securities watchdog said Sunday it respects companies’ choices on where to list their stock while again denying reports of a possible ban on one method of overseas stock listings.

The China Securities Regulatory Commission also said in a statement that reports are “completely misleading” that regulators are promoting firms drop their U.S. listings. Some domestic companies are actively working with Chinese and foreign regulators to have shares listed in the U.S., the agency said.

The CSRC said in a statement Wednesday it wasn’t true that China would stop overseas listings of firms using a variable interest entity structure. Bloomberg News reported that such a ban is in the works, citing people familiar with the matter, an effort in part intended to address data-security concerns.

Meanwhile, the agency said Sunday that recent Chinese policies to regulate online platforms were aimed at curbing monopolies and ensuring data security. The rules won’t target a particular industry or just the private sector, and they aren’t necessarily linked to overseas listings, according to the CSRC.

Why China, U.S. Clash Over Stock Listings Like Didi: QuickTake

The watchdog also called for pragmatic China-U.S. cooperation on audit oversight, stressing that forcing U.S.-listed Chinese companies to delist isn’t a responsible policy option. “Positive progress” has been made in talks on regulatory cooperation between the CSRC and U.S. securities and accounting regulators, the agency said.