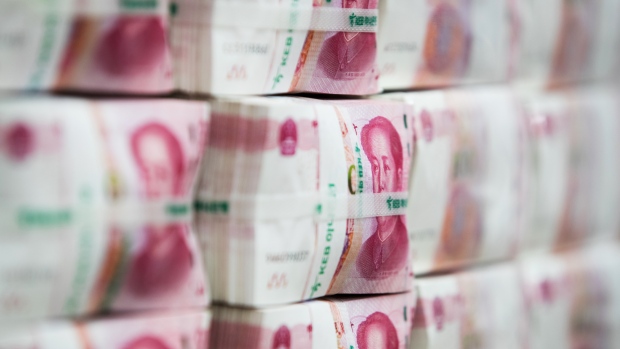 China’s central bank acted to release cash into the economy to support growth, cutting the amount of cash lenders must hold as reserves by 1 percentage point.

The required reserve ratio for banks will drop by 0.5 percentage point on January 15 and a further 0.5 percentage point on January 25, the People’s Bank of China said on its website. Medium-term Lending Facility loans maturing in the first quarter won’t be rolled over, and the amount of liquidity released will be able to offset the funding squeeze ahead of the Chinese New Year, it said.

The cut will release a net 800 billion yuan (US$116 billion) of liquidity, the PBOC said in a separate statement.

The latest reduction announced is the first all-inclusive RRR cut since March 2016. China’s top leaders have pledged to keep monetary policy prudent while striking an "appropriate" balance between tightening and loosening in 2019, part of the steps to ratchet up stimulus to support growth.

The offshore yuan pared gains slightly to trade 0.1 per cent higher at 6.8763 per dollar as of 6:30 p.m. local time. Hang Seng and Nikkei futures rose.

Today’s cut is still "targeted" easing rather than wide-ranging stimulus, the PBOC said, adding that its “prudent monetary policy stance hasn’t changed.” Implementing the cut in two phases ensures “overall banking liquidity stays reasonable and sufficient while balancing internal and external factors to keep the yuan’s exchange rate at a reasonable and equilibrium level,” it said.

The PBOC had cut reserve requirement ratios for some banks four times in 2018, and recently introduced a targeted version of its Medium-Term Lending Facility to supply lower-cost funding to banks, a move analysts see as a toned-down version of rate cut.

“This may in part be a reaction to the bad PMI data and the equity market sell-off we have seen," said Michelle Lam, a greater China economist at Societe Generale SA in Hong Kong. “They’re trying to restore market confidence and need to ease credit conditions to boost lending to the private sector and because of high seasonal demand for cash.”

China’s manufacturing purchasing managers index fell into the contraction territory last month, the weakest since early 2016. Early indicators for December signal the economic slowdown is deepening, after official data showed industrial production growth was the weakest in a decade and industrial profits fell for the first time in almost three years in November.

“How much can this help the economy remains to be seen,” said Tao Dong, vice chairman for Greater China at Credit Suisse Private Banking in Hong Kong. “The central bank has been handing liquidity to the banks, but the banks are unwilling to lend. This is a classic case of banking disintermediation amid the down cycle.”