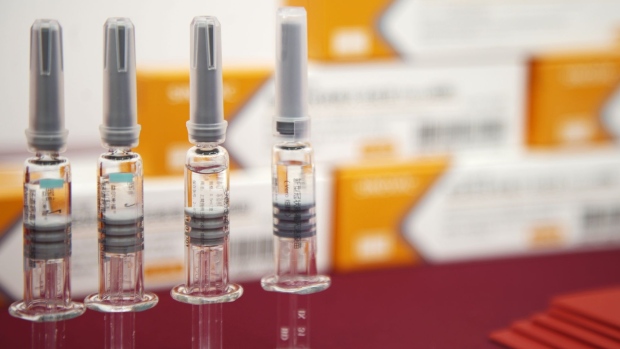 Vials of Sinovac Biotech Ltd.'s CoronaVac SARS-CoV-2 vaccine are displayed at a media event in Beijing, China, on Thursday, Sept. 24, 2020. Chinese vaccine developer Sinovac said that countries running its final-stage clinical trials like Brazil, Indonesia and Turkey will get its coronavirus shots at the same time as China, underscoring how vaccine supply agreements could cement diplomatic ties in the Covid-19 era. , Bloomberg

China said giving coronavirus vaccines still in clinical trials to hundreds of thousands of people is justified given the risk of COVID-19 returning through its borders and the lack of any significant side-effects so far from the shots.

The country authorized the emergency use of three vaccines developed by local firms China National Biotec Group Co. and Sinovac Biotech Ltd. in July to frontline workers, including medical staff treating virus patients, and to border officials. But that has since been widened to include employees of state-owned companies, and the government is also considering offering experimental jabs to students heading overseas to study. Sinovac, whose CoronaVac jab began final-stage clinical trials three months ago, is allowing members of the public in at least two Chinese cities to register to receive the vaccinations, as well.

Despite all-but-eliminating the virus, China is still seeing “enormous pressure” from imported cases, Zheng Zhongwei, a director overseeing coronavirus vaccine development at the National Health Commission, said at a briefing in Beijing on Tuesday. Those who take part in the emergency-use program are tracked for any adverse reactions to the shots and so far no serious responses beyond low-grade fevers and rashes have been reported, he said.

China’s emergency-use parameters were approved after rigorous deliberation among vaccine and ethics experts, and also got the backing of the World Health Organization, Zheng said. Officials at the briefing didn’t provide details of how people who receive vaccines under the emergency-use program are being monitored.

Chinese vaccine developers have been at the forefront of the global race to create an effective immunization against the virus. The push has taken on vital importance as countries look to move beyond COVID-19 and more definitively re-open their economies.

Vaccine development processes that usually take years have been compressed into months by global players, encouraged by politicians wanting a quick fix to the pandemic that has sickened more than 40 million. But the rush has raised concerns over safety. Western front-runners like Johnson & Johnson and AstraZeneca Plc have temporarily halted their clinical trials in recent months after unexplained illnesses in participants.

Representatives for both Sinovac and China National Biotec’s parent, Sinopharm, said at the briefing that there had been no reports of participants in their ongoing Phase III vaccine trials experiencing serious adverse reactions. The companies have enrolled more than 50,000 people worldwide in the tests.

While new infections in China have remained below 100 a day since mid-August, the country where the virus first emerged continues to see small flare-ups, with the most recent in the eastern port city of Qingdao. It has managed to stamp out these clusters -- including an outbreak in its capital, Beijing, in June -- through mass testing campaigns that screen millions of citizens for the virus within days. Masks and temperature checks are generally still required in public places and all travelers entering from abroad must quarantine for 14 days.

Sinopharm will be able to produce 1 billion coronavirus vaccine doses as of next year, Chairman Liu Jingzhen said at Tuesday’s briefing.