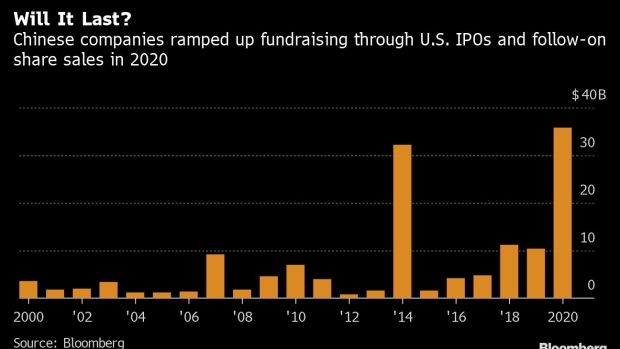 A pedestrian wearing a protective mask walks past signage at a China Telecom Corp. store in Hong Kong, China, on Monday, Jan. 4, 2021. China's state-owned telecommunications companies declined in Hong Kong after the New York Stock Exchange said it's delisting them to comply with a U.S. executive order that sanctioned companies identified as affiliated with the Chinese military. , Bloomberg

(Bloomberg) -- For more than two decades Chinese companies have turned to the U.S. stock market for capital and international prestige, raising at least $144 billion from some of the world’s largest investors.

Now this pillar of China’s integration with the global financial system is increasingly under threat.

The latest blow arrived on New Year’s Eve, when the New York Stock Exchange said it would delist three state-owned telecom companies to comply with Donald Trump’s November order barring U.S. investments in Chinese firms determined to be owned or controlled by the military. It’s the first time an American exchange has removed a Chinese company as a direct result of rising geopolitical tensions under the outgoing Trump administration.

While the impact on China Mobile Ltd. and its two peers is likely to be minimal given the bulk of their shares trade in Hong Kong, the delistings underscore the risks for both Chinese and U.S. companies as tensions between the superpowers simmer. China’s largest offshore oil producer fell in Hong Kong on Monday amid speculation its U.S. shares may enter the cross-hairs next. Trump signed legislation with bipartisan support last month that could kick more Chinese firms off U.S. exchanges unless American regulators can review their financial audits.

“There is bound to be a cost to Chinese companies from being shut out of the U.S. or being delisted,” said George Magnus, a research associate at Oxford University’s China Centre and author of “Red Flags: Why Xi’s China is in Jeopardy.” A listing in the U.S. “looks a less attractive proposition nowadays, particularly if you’re a state-owned enterprise with close links to the People’s Liberation Army or internal security,” Magnus said.

The worry for U.S. companies is that their access to China’s vast economy could be curtailed in any escalation of tit-for-tat sanctions. Wall Street banks are particularly keen to see a ratcheting down of tensions after gaining unprecedented scope to operate in China last year. China’s securities regulator responded to the delistings by calling them groundless and “not a wise move,” though it didn’t outline any plans to retaliate.

NYSE said it will suspend trading in the American depositary shares of China Mobile, China Telecom Corp. and China Unicom Hong Kong Ltd. before Jan. 11. In his executive order, Trump said the companies were among those directly supporting the Chinese military, intelligence and security apparatuses and aiding in their development and modernization.

The affected shares are worth less than 20 billion yuan ($3.1 billion) and account for at most 2.2% of the total shares in each company, the China Securities Regulatory Commission said in a statement on Jan. 3, adding that the companies are well positioned to handle any fallout. While China Mobile sank as much as 4.5% to a 14-year low in Hong Kong, the stock pared its loss to 0.8% at the close. The New York-listed shares fell about 3% before the official open of U.S. exchanges.

China Mobile was among the nation’s first major companies to sell shares in the U.S., part of a “red chip” boom in 1997 that fizzled as the Asian financial crisis took hold. The IPO performed poorly on its debut, but nonetheless heralded a flood of Chinese listings in the U.S. over the coming decades.

The combined market value of China-domiciled companies with at least a portion of their shares traded in the U.S. now stands at upwards of $1.9 trillion, a list that includes blue-chip names from Alibaba Group Holding Ltd. to NetEase Inc. and JD.com Inc. Chinese companies raised a record $36 billion from U.S. initial public offerings and follow-on share sales in 2020, data compiled by Bloomberg show. Companies backed by international venture capital firms often prefer U.S. listings to those in China, which are subject to the nation’s capital controls.

While the figures suggest many companies have shrugged off the risk of delistings, others have been making backup plans. Alibaba, JD.com and NetEase are among those that have added secondary listings in Hong Kong since late 2019.

Speculation that more may follow suit sent shares of Hong Kong Exchanges & Clearing Ltd. up 4% to a record on Monday. Oft-cited candidates for secondary listings include Pinduoduo Inc., a fast-growing e-commerce company that listed in the U.S. in 2018, and Baidu Inc., the search engine operator that debuted on the Nasdaq in 2005.

Chinese President Xi Jinping has also been trying to boost his country’s domestic equity markets in Shanghai and Shenzhen, with a raft of recent reforms to attract tech companies that had historically flocked to New York. Jack Ma’s Ant Group Co. was due to become the highest-profile addition to Shanghai’s much-touted Star board, until the IPO was abruptly shelved by regulators in November.The outlook for further delistings may depend in large part on how U.S.-China relations evolve after president-elect Joe Biden steps into the White House later this month. While Xi said in a congratulatory message to Biden in November that he hopes to “manage differences” and focus on cooperation between the world’s two largest economies, few expect tensions to ease anytime soon.Read more: How Top Funds Are Trading America’s Superpower Clash With China

“We don’t know as to how the Biden administration will pick up the baton that’s been left by the Trump administration,” Oxford University’s Magnus said. “There will certainly be a transition cost to China if the mood in the U.S. remains sour.”