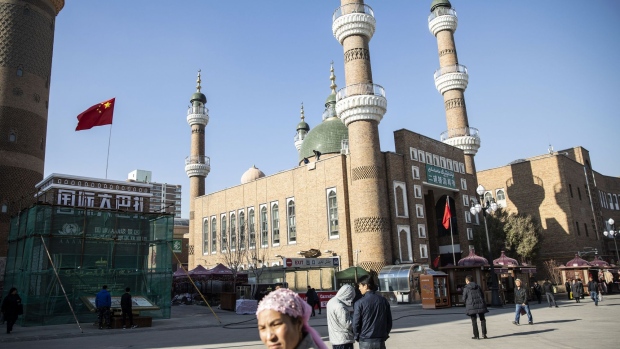 Pedestrians walk past the Erdao Bridge Mosque, center, in Urumqi, Xinjiang autonomous region, China, on Tuesday, Nov. 6, 2018. Although it represents just 1.5 percent of China's population and 1.3 percent of its economy, Xinjiang sits at the geographic heart of Xi's signature Belt and Road Initiative. Source: Bloomberg/Bloomberg , Bloomberg

(Bloomberg) -- China pushed back on Monday against allegations its Muslim minority were mistreated and accused other nations of using human rights as a tool to interfere in its domestic affairs.

Facing sustained international criticism over Beijing’s treatment of Uighurs in the northwestern region of Xinjiang, Foreign Minister Wang Yi touted what he said were the benefits to people living there of greater security and freedom from terrorist attacks, and insisted that labor rights and personal freedoms were not restricted.

“There has never has been so-called genocide, forced labor or religious oppression in Xinjiang,” Wang told the United Nations Human Rights Council by video. “Such inflammatory accusations are fabricated out of ignorance and prejudice.”

While China says it’s fighting separatism and religious extremism among Uighurs, a UN assessment found that anywhere from tens of thousands to “upwards of 1 million” Uighurs have been detained in internment camps.

Wang said China’s deradicalization measures in the area were in accordance with the law as well as the UN’s counter-terrorism strategy. As a result, local people were leading “safe and happy lives,” he said.

Others speaking at the UN meeting criticized Beijing for its actions in Xinjiang.

“The situation in Xinjiang is beyond the pale,” U.K. Foreign Secretary Dominic Raab said. “The reported abuses -- which include torture, forced labor and forced sterilization of women -- are extreme and they are extensive.”

German Foreign Minister Heiko Maas said the commitment to the Universal Declaration of Human Rights “leaves no room for the arbitrary detention of ethnic minorities like the Uighurs in Xinjiang.” Germany alongside other countries is moving toward penalizing companies if their suppliers from other countries breach human rights.

Earlier this month, U.S. President Joe Biden expressed concern in a phone call with Chinese President Xi Jinping about what he said were China’s “coercive and unfair economic practices” as well as human rights abuses.