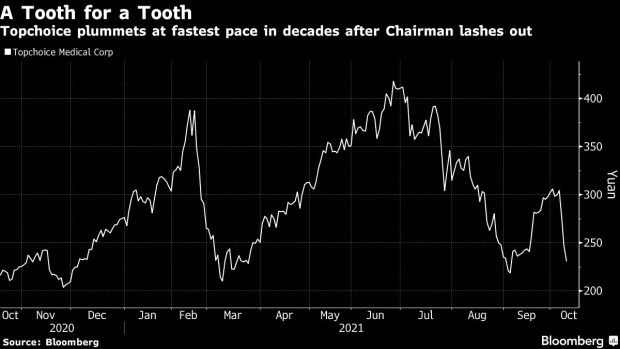 (Bloomberg) -- An around 23% plunge over just three sessions in one of China’s most prominent health care stocks has apparently made the company’s chief lose his calm.

Dental hospital chain operator Topchoice Medical Corp plummeted as much as 8% to take three-day losses to the steepest since 1996 at one point. The stock, which pared the retreat to 4.7% at the close, started plunging before the firm’s earnings report, and analysts have cut profit estimates for higher costs of its expansion plans.

The company’s chairman over the weekend responded aggressively to an article by an internet user that said the stock’s high valuations were not matched by earnings. Bloomberg cannot verify the identity of the user, who published the remarks on online stock investor forum Xueqiu.com.

“Foul-mouthed” investors are not welcomed by the company, a user with the handle Jimmylui, whose account was verified by the platform as Topchoice Chairman Lv Jianming, commented under the article. Their purchase of the firm’s shares is “a humiliation,” he added. The account has since been deleted.

“The chairman’s has shown a lack of respect for public shareholders in his overly emotional communication on Xueqiu,” said Chen Shi, a fund manager at Shanghai Jade Stone Investment Management Co. Ltd. “He is losing his cool probably because he feels the firm is wronged by short-sighted investors.”

Topchoice’s public relations officers were not immediately available for comment when contacted by Bloomberg by phone on Monday.

The Hangzhou-based company reported earnings growth of 5.9% for the third quarter. Its stock has nearly halved since a 51% climb from the end of 2020 to an all-time high in late June, and has been one of the top drags on the benchmark CSI 300 Index over the past four months.