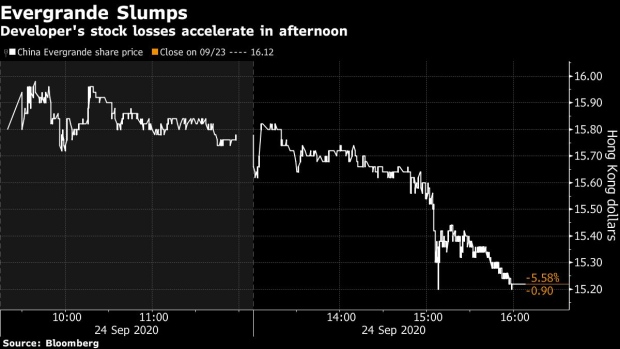 A worker carries a garbage bag in front of the Evergrande International Hospital inside the Hainan Boao Lecheng International Medical Tourism Pilot Zone in Boao, China, on Wednesday, March 27, 2019. , Bloomberg

(Bloomberg) -- The world’s most indebted developer has warned Chinese officials it faces a potential default that could roil the nation’s $50 trillion financial system unless regulators approve the company’s long-delayed stock exchange listing.

China Evergrande Group mapped out the scenario in an Aug. 24 letter to the Guangdong government seen by Bloomberg. The letter, which sought support for a restructuring proposal needed to secure the listing, sparked a sell-off in Evergrande’s shares and bonds on Thursday after circulating online.

Evergrande faces a critical test on Jan. 31, when strategic investors are allowed to exit unless it gets approval for a listing on the Shenzhen stock exchange. If they refuse to extend the deadline or secure the listing, the company will need to repay as much as 130 billion yuan ($19 billion), equivalent to 92% of its cash and cash equivalents.

That may lead to “cross defaults” in Evergrande’s borrowings from banks, trusts, funds and the bond market, eventually leading to systematic risks for the broader financial system, according to the document sent to the provincial government of Guangdong, where the company is based.

Evergrande shares fell 5.6% in Hong Kong Thursday to a four-month low on concerns that it won’t meet the deadline. Evergrande Real Estate Group’s domestic bond due in 2023 closed at a record low, according to prices compiled by Bloomberg.The developer’s dollar bonds also sank, pulling down other Chinese property and high-yield notes by as much as 2.5 cents on the dollar, according to traders.

Evergrande in August reiterated an aggressive deleveraging target -- cutting borrowings by about 150 billion yuan each year from 2020 to 2022, or about half its current debt load. So far it’s fallen short of the pledge.

It has since launched a nationwide sales blitz to recoup cash, raised $3 billion by selling a stake in its service arm and reduced spending on land purchases. It expects total investment on electric vehicles to be 29 billion yuan, lower than 45 billion yuan planned earlier.