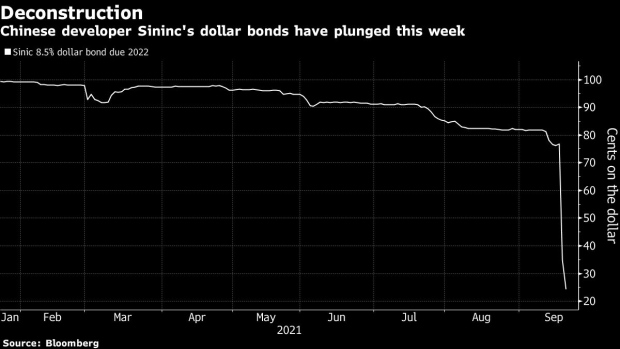 (Bloomberg) -- The dollar bonds of Chinese developer Sinic Holdings Group Co. have come under intense selling pressure this week, following a plunge in the firm’s shares and a credit rating downgrade on concerns over its finances.

Sinic’s $246 million bond due Oct. 18 was trading at around 25 cents to 28 cents on the dollar Tuesday morning, according to credit traders. The note finished last week around 90 cents, according to data compiled by Bloomberg. The firm’s two dollar notes maturing next year were indicated to have fallen to below 25 cents, the data shows, from around 75 cents.

S&P Global Ratings lowered Sinic to CCC+ from B on Tuesday and put it on watch for further downgrade, citing “substantial risk” about the note’s maturity and that “concrete repayment plans” might not be implemented. That followed Monday’s 87% stock plunge in Hong Kong for the Shanghai-based developer before trading was halted.

The slump in Sinic’s dollar notes has come amid deepening concerns about China’s property sector. A gauge of developer stocks plunged to a five-year low on Monday. Contagion fears arising from China Evergrande Group’s debt crisis is sending even safer debt in Asia to slump. Meanwhile, yields on China’s junk-rated dollar bonds in a Bloomberg index surged to 14.9% Monday, the highest in nearly a decade.

Sinic has entered more than 50 cities in China, focusing on regions such as the Greater Bay and Yangtze River Delta areas according to its website. The company did not immediately respond to a Bloomberg request for comment on Tuesday.