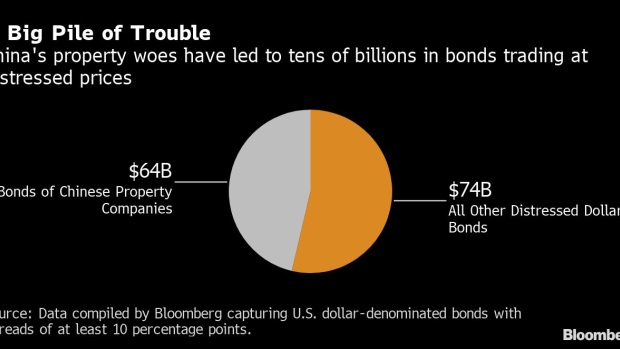 (Bloomberg) -- In a world where central bank stimulus has wiped out most of the distress from global bond markets, the troubles of China’s property companies are standing out.

Of the $139 billion of U.S. dollar-denominated bonds trading at distressed prices, 46% were issued by companies in China’s real estate sector, according to data compiled by Bloomberg on Oct. 12, which captured bonds trading at yield premiums of at least 10 percentage points above their benchmark rates.

Junk-rated dollar bonds from Chinese issuers have reached yields not seen in about a decade following months of weakness on concerns about rising debt-repayment pressure for developers and the sector’s increasing number of defaults.

The strains have been fueled by the troubles of industry giant China Evergrande Group, which missed bond interest payment deadlines starting last month. That was followed with a surprise default by Fantasia Holdings Group Co. and a warning from Sinic Holdings Group Co. that its default was imminent.

The stress has hit scores of issuers tied to the Chinese property market, leaving a $64 billion pile of troubled debt that dwarfs other sectors.

The following is a list of Chinese property borrowers whose bonds trade with yield spreads of at least 10 percentage points. For a worksheet that includes all such dollar bonds globally, click here.