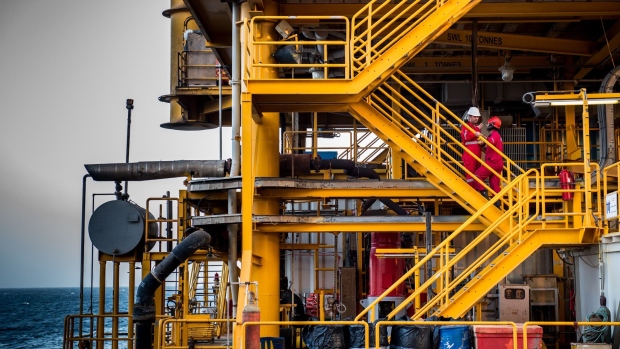 Workers work on a stairway aboard an offshore oil platform in the Persian Gulf's Salman Oil Field, operated by the National Iranian Offshore Oil Co., near Lavan island, Iran, on Thursday, Jan. 5. 2017. Nov. 5 is the day when sweeping U.S. sanctions on Iran’s energy and banking sectors go back into effect after Trump’s decision in May to walk away from the six-nation deal with Iran that suspended them. Photographer: Ali Mohammadi/Bloomberg , Bloomberg

(Bloomberg) -- China shipped in Iranian oil last month -- the first official flows of crude into the largest importer from the Islamic republic in a year -- amid talks between between Tehran and world powers aimed at reviving a nuclear accord that could pave the way for lifting U.S. sanctions.

A total of 260,312 tons, or 1.9 million barrels, arrived in December, according to customs data on Thursday. That’s the first time the Chinese central government has reported any purchases from the fifth-largest producer in the Organization of the Petroleum Exporting Countries since Dec. 2020.

Beijing maintains its ties with Tehran are not affected by the U.S. sanctions, and analysts estimate the country remains a big buyer. China was observed to have bought 324 million barrels from Iran and similarly sanctioned Venezuela in 2021, well up on a year ago, according to market intelligence firm Kpler.

U.S. President Joe Biden said on Wednesday that “it’s not time to give up” on reviving the 2015 nuclear accord with Iran as some progress had been made in negotiations in Vienna between Iran and other states. If the sanctions are eased, the Persian Gulf country may be able to raise exports, hurting prices.

Oil has gained about 25% since the end of November, with Brent hitting the highest since 2014 this week as stronger-than-expected demand and supply outages tightened the market. Earlier this week, Iran-backed Yemeni fighters launched drone strikes on the United Arab Emirates that caused explosions and a deadly fire, ratcheting up security risks in the oil-exporting region.