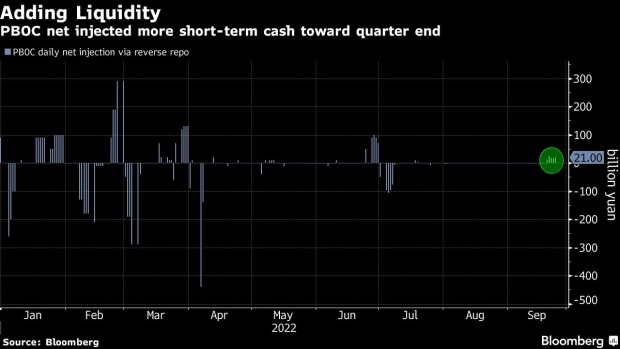 The People’s Bank of China net injected 92 billion yuan ($13 billion) into the banking system via reverse repos this week, the most since June. While the move was aimed at avoiding a cash crunch at quarter-end, the gradual additions signal that authorities also want to avoid flooding the banking system with cash and weakening the currency further.

“The injection is likely a preemptive move ahead of quarter end and the October Golden Week holiday,” said Winson Phoon, head of fixed income research at Maybank Securities Pte Ltd. in Singapore, “The widening US-China rate differential will continue to weigh on the yuan. But the regulators likely want to balance this against the need of ensuring ample liquidity to anchor sentiment and encourage credit lending.”

The PBOC last week held back from lowering a key policy rate as it sought to ease pressure on the yuan from outflows. An unexpected cut last month spurred currency losses which later snowballed due a hawkish Federal Reserve. That’s helped depreciate the yuan by more than 10% against the dollar this year and set it on track for the worst annual loss since 1994.

Yuan weakness could extend in case the PBOC eases its policy further. China’s current interest rates are “reasonable” and provide room for future policy action, it said in a statement this week. Goldman Sachs Group Inc. cut its 2023 economic growth forecast for China to 4.5% in 2023, down from a previous projection of 5.3% as it expects the nation to stick to strict Covid Zero policies through at least the first quarter of next year.

The PBOC stepped up its currency defense by setting stronger-than-expected yuan fixings for 22 straight sessions. It also reduced banks’ foreign currency reserve requirement to increase the supply of dollars and other currencies onshore and relieve the yuan’s weakness.

Traders will watch the amount of cash injections by the PBOC in the run-up too the end of the quarter. The daily injections this week varied from 12 billion yuan to 24 billion yuan. Monthly average of seven-day repo rate, a gauge of short-term borrowing costs for banks, rose to 1.5% this month, compared to 1.4% in August, it’s still lower than the PBOC’s 7-day reverse repo rate of 2%, indicating that liquidity remains relatively abundant.