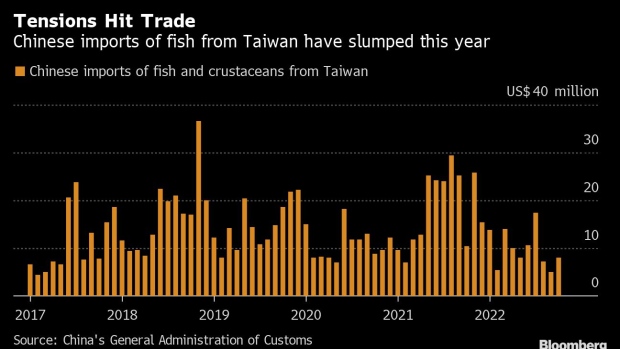 (Bloomberg) -- China has dramatically scaled back purchases of Taiwanese fish this year, as Beijing seeks to punish the island’s democratically elected government for expanding ties with the US and its allies.

China imported $56 million worth of fish and crustaceans in the six months from May to October, compared with $138 million during the same period a year earlier, according to China Customs data. Recent purchases have been almost entirely limited to cuttlefish, squid and products not intended for human consumption, such as aquarium animals and brine shrimp for feeding other fish.

Taiwan exported an average of about $175 million of fish and crustaceans to China over the past five years, according to Chinese data. That’s compared with $100 million in the first 10 months of this year.

While food makes up a tiny fraction of Taiwan’s more than $328 billion of two-way trade with China last year, it’s one area where Beijing can find alternative sources, unlike the island’s vital semiconductor industry. China announced in the wake of US House Speaker Nancy Pelosi’s visit to Taipei in August that it would suspend imports of some fish and fruit from the island.

Chinese President Xi Jinping has sought to ramp up pressure on Taiwan’s leader, Tsai Ing-wen, over her refusal to accept Beijing’s position that both sides belong to “one China.” The curbs on food imports were just one part of Beijing’s explosive response to the Pelosi visit, which included firing ballistic missiles over the island and halting some talks with Washington.

Since April 2021, Chinese customs authorities have asked global exporters to submit new registration documents to retain access to the country’s market, prompting the US, Japan and other nations to voice concerns over possible disruptions to supply chains.

Taiwan said its companies were asked to provide supplementary documentation in August. The Agriculture Council in Taipei said at a news briefing Thursday that around 100 firms have submitted the documents, but the website of China Customs shows only one, Wei-I Foodstuff Co., has so far received approval.

Taiwan Premier Su Tseng-chang accused China of breaking World Trade Organization rules, saying in a briefing Friday that “aquatic products were banned without any warning after pineapple, sugar apples and grouper a while ago.”

The government in Taipei would take steps to “reduce the damage done to related businesses,” he said, adding that it would work to open more markets to fishermen.