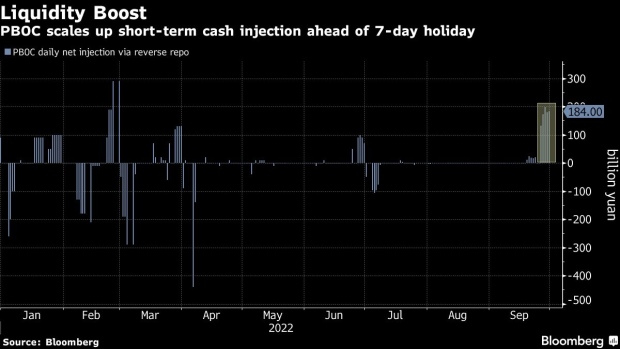 (Bloomberg) -- China bumped up its injection of short-term liquidity by more than nine times this week, signaling its resolve to avoid a cash squeeze during the Golden Week and in the run-up to the Communist Party’s twice-a-decade leadership summit.

The People’s Bank of China net injected 868 billion yuan ($122 billion) into banking system via reverse repos this week, the most since January 2019. That’s after a net injection of 92 billion yuan in the previous week. Quarter-end and Golden Week holidays next week may have played a part in the PBOC’s decision to boost liquidity, according to Maybank Securities Pte Ltd.

“The party meeting is in about one week after the long holiday and stability is paramount,” said Winson Phoon, head of fixed income research at the firm. “It’s more important to maintain an orderly functioning of the domestic market at this juncture as China faces intensified external volatiles that are reflected in the dollar-yuan move,” he said.

The PBOC has been wary of flooding the banking system with cash to avoid further weakening the yuan. However, the latest cash boost came as the monthly average of seven-day repo rate, a gauge of short-term borrowing costs for banks, rose to 1.6% this month, compared to 1.4% in August. It’s still lower than PBOC’s 7-day reverse repo rate of 2%, indicating that liquidity remains abundant.

The demand for cash typically rises during month and quarter-end as corporates pay tax. An increase in cash withdrawals by individuals during holidays also tends to drain liquidity in the banking system.