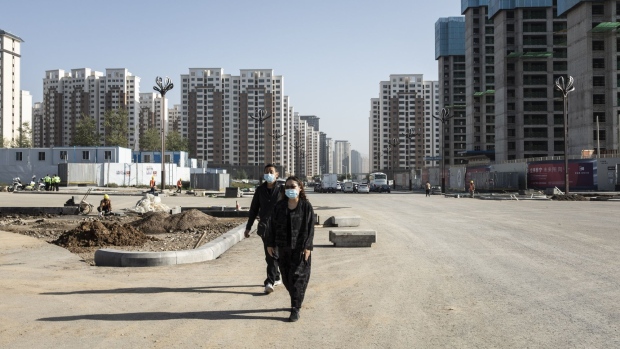 Pedestrians near apartment blocks under construction in the Nanchuan area of Xining, Qinghai province, China, on Tuesday, Sept. 28, 2021. China has urged financial institutions to help local governments stabilize the rapidly cooling housing market and protect the rights of some homebuyers, another signal that authorities are worried about fallout from the debt crisis at China Evergrande Group. Photographer: Qilai Shen/Bloomberg , Bloomberg

(Bloomberg) -- China Evergrande Group said it has terminated discussions to sell its property-management arm and asked that its shares resume trading in Hong Kong on Thursday.

Hopson said in a separate statement that it “regrets to announce that the vendor has failed to complete the sale” and that its shares would also resume.

Shares of the three companies had been suspended since the start of this month pending an announcement of a major transaction, they said on Oct. 4.