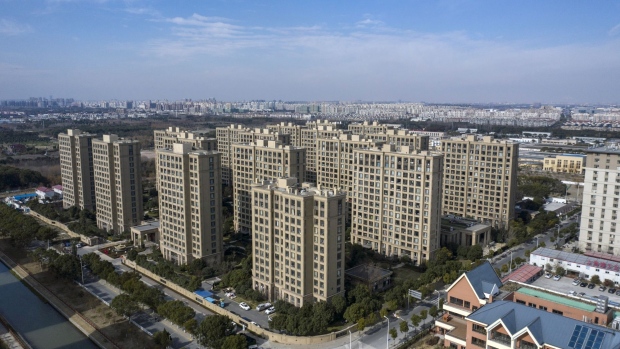 (Bloomberg) -- China’s crackdown on its real estate sector shows few signs of stopping as officials seek to reduce the risk of a U.S.-style financial crisis.

The big questions now are what will the world’s largest property market look like at the end of this process -- and whether the Communist Party can avoid a hard landing of the economy.

China watchers predict the days of home-price surges and debt-fueled building sprees by billionaire property tycoons are set to fade. They’ll be replaced by a much more staid market where authorities are quick to clamp down on speculative frenzies and development is dominated by state-run companies earning utility-like returns.

Below is a compilation of what analysts, investors and economists have to say.

Eswar Prasad, who once led the International Monetary Fund’s China team and is now at Cornell University.

China will need to restrain speculative activity in the property sector by putting financial and regulatory constraints on undisciplined and highly leveraged property developers as well as households acquiring multiple properties purely as investment vehicles.

This could cause a shake-out in the property sector, with potentially adverse consequences for economic growth and financial stability. Beijing seems to have determined that these are likely to be transitory costs that cannot be avoided any longer for the sake of limiting future financial market gyrations and even more imbalances in property markets.

China’s pace of construction has run far ahead of fundamental demand by owner-occupiers over the past five years, and the most probable resolution of that imbalance is a multi-year slowdown in construction activity.

Policy can help to moderate this decline or extend it in time, but probably cannot change the fact that a key driver of China’s economy over the past two decades is going to represent a meaningful drag on growth for the next few years, at least.

It’s probable that pre-construction sales will be substantially lower in the future, both because Beijing is likely to tighten regulations on the practice, and because more homebuyers will lose confidence in developers’ financial conditions and demand completed homes before purchasing.

For some troubled property giants with systemic importance and potential risks of contagion, we think the government will likely participate in their restructuring process, in order to prevent a sharp housing market deterioration and to achieve social and financial stability.

We expect to see government-backed investment platforms and SOE developers involved in such restructuring, if not a takeover from the state eventually. Conversely, for developers with less systemic importance and market attention but better property-focused asset portfolios, negotiation and restructuring should be easier. In short, polarization and consolidation of developers could be seen.

We think policy could guide a manageable and achievable property soft-landing in China. A successful deleveraging campaign, if with higher transparency, could lay the groundwork for a healthier and stronger economy with less shaky foundations in the future.

The outsized influence on the economy should fade out in 10 years and will be replaced by high-tech and green investments.

Gaining market share may not be benefiting from the property market. State-support type developers should take up more market share, but they can only benefit from this if home prices rise continuously, which seems difficult for the coming one to two years.

The transition will be long and painful, and we are not entirely sure whether the top has strong enough resolve to see through the arduous process. Developers with implicit state backing will gain, and they are already gaining.

It will take more than half a decade I believe. It will be successful, as the political succession makes sure that if the resolve is in place it will succeed.

A slowdown is inevitable. The best we can expect is a relatively soft landing over the coming quarters.

I don’t think there will be a financial crisis. China still has a lot of tools to manage these risks. Banks play the major role, directly or indirectly, in funding the property sector and the government still has very good control of the banking system -- so the chance of China having chaos in financial markets is quite small.

There’s currently a lack of obvious candidates to replace property and the multiple purposes it serves within China. The property market will undergo a dramatic consolidation and will become more SOE-dominated. This is a new normal. The debt limits on the developers aren’t going away. Local governments will need to harvest income from rental properties. Banks will need to be recapitalized. China will need to find new drivers of consumption and alternative savings vehicles. And it will need to step away from the growth target -- Xi Jinping can’t double income by 2035, this is neither achievable or sustainable.

Will China pull it off? It may end up being more painful than anticipated. They’re tackling a chronic problem and trend growth is going to keep dropping. Households will be reluctant to take on debt while the corporate sector is being told not to. That means China can only really down the government debt route.

The government wants to encourage consolidation in the housing sector -- larger and often state-owned developers will likely take over the weaker players. That consolidation suits the government’s long-term objectives for the housing sector quite well. It allows them to exert more control over the sector. They want to break the economy’s addition to property and one way of doing that is if you have a far smaller number of developers, it’s easier to control the amount of housing that gets built.

The golden age of booming property prices and soaring revenue for developers is probably gone. Home prices will only grow at a tightly managed zone in the future, meaning housing will look increasingly like utilities.

If we call the past decade a golden age for real estate industry, it is now trapped in the age of rust.

The Chinese government won’t allow systemic risk in such an important market. They will let bombs go off in an orderly manner.