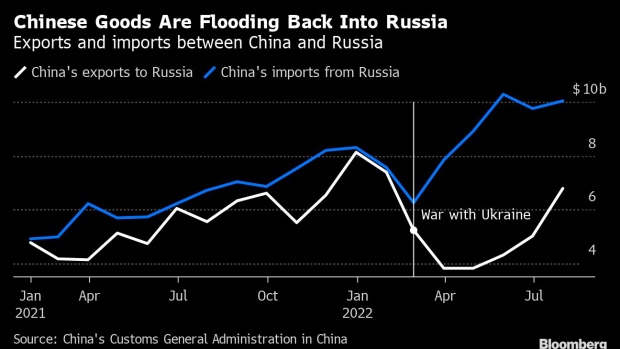 A gantry crane and containers at the Yangshan Deepwater Port in Shanghai, China, on Tuesday, July 5, 2022. Senior US and Chinese officials discussed US economic sanctions and tariffs Tuesday amid reports the Biden administration is close to rolling back some of the trade levies imposed by former President Donald Trump. Photographer: Qilai Shen/Bloomberg , Bloomberg

(Bloomberg) -- Chinese exports to Russia are back near levels seen before the Kremlin’s invasion of Ukraine, propelling a rebound in trade that’s helped cool off a historic rally in the ruble.

Russia bought $6.7 billion of goods in July from China, an increase of more than a third from the previous month and up by more than an annual 20%. By contrast, its imports from Russia -- which surged in March-May -- rose only slightly last month after a drop in June, according to data from China’s customs authority.

Chinese goods are filling the niche left by the exodus of western brands after the war with Ukraine prompted sweeping financial and trade sanctions against Russia.

The isolation has catapulted products such as vehicles manufactured by the likes of Great Wall Motor Co. and Geely Automobile Holdings Ltd. to the ranks of Russia’s best-selling cars, with their market share more than doubling from last year.

The revival of demand for Chinese exports is playing out in the currency market. Trading volumes in the yuan-ruble pair increased to the highest ever last month as local demand for the Chinese currency surged.

With Russian consumer spending on the mend, the influx of foreign goods is taking some pressure off the ruble by reviving demand for hard currencies. In July, the ruble was the worst performer in emerging markets with a loss of 13% against the dollar.

Surging prices for Russia’s commodity products, in combination with the collapse of imports, had contributed to a surplus of foreign exchange that powered the ruble.

Still, growth in sales from Russia into China has started to lag behind. Following Russia’s diversion of crude to Asia from European customers, oil shipments to China have come down from their post-invasion peak.

(Updates with ruble’s performance in sixth paragraph. An earlier version of this story corrected to remove reference to Chinese services in second paragraph.)