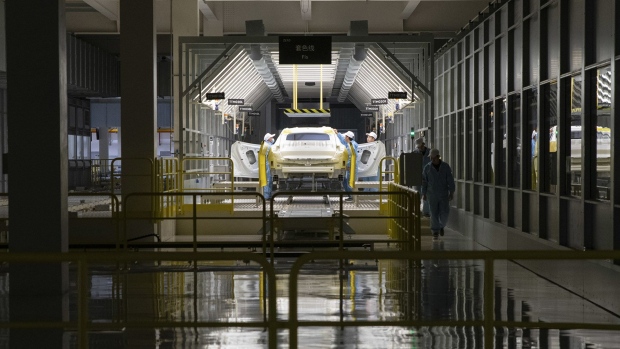 (Bloomberg) -- China is drafting measures to rein in overcapacity in the electric-vehicle sector and channel resources in a more targeted way to a number of key production hubs throughout the country, according to people familiar with the matter.

Regulators are considering setting a minimum production capacity utilization rate for the EV sector, and provinces that aren’t meeting it won’t be allowed to greenlight new projects until surplus capacity comes online, the people said, asking not to be identified because the details are private.

The aim is to both guide automakers to areas in China where there is currently underutilized capacity and force the closure of car factories that have been built over the past few years but that are now redundant, the people said. The plan isn’t final and the production capacity utilization rate that’s being considered may change, the people said.

Read more: China’s Electric Car Capital Has Lessons for the Rest of World

China’s EV market is the biggest in the world, spurred by government subsidies that have encouraged consumer adoption as well as a rapid increase in the number of companies making cleaner automobiles. Those firms have mushroomed across China as provincial authorities have offered tax breaks and other incentives to set up shop. Jiangsu province to the north of Shanghai, for example, has become one such hub, now home to around 30 automakers, several of them bankrupt.

The average production capacity utilization rate for automakers in China overall was about 53% last year, according to Bloomberg calculations based on a Jiangsu province submission to the NDRC earlier this year. China has around 300 EV makers, according to a Xinhua report in April citing official statistics.

Officials from MIIT and the NDRC said over the weekend that one key task for regulators is to ensure a good supply of the raw materials used in EV batteries, such as lithium, nickel and cobalt. The year-long chip shortage has also curtailed production, further underscoring the importance of matching production capacity to demand.