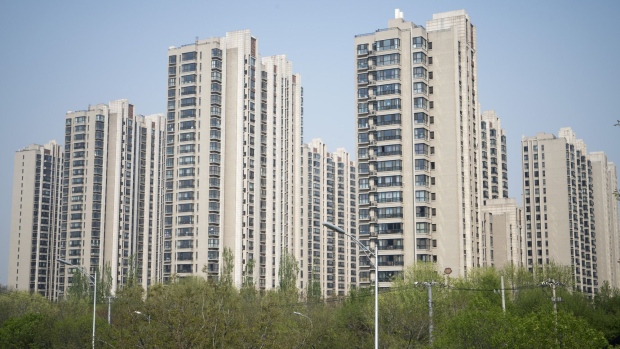 Residential buildings stand in the Taiyanggong area of Beijing, China, on Monday, April 16, 2018. New home prices in Beijing and Shanghai have jump more than 25 percent over the last two years. , Bloomberg

(Bloomberg) -- Beijing’s new plan to use real estate rules to calm tensions in Hong Kong and forge a closer bond with mainland China is being met with skepticism on both sides.

The city’s embattled Chief Executive Carrie Lam said on Thursday that China had agreed to introduce 16 measures that will benefit Hong Kong and Macau residents under the Greater Bay Area integration program. The most eye-catching proposal is one that will make it easier for Hong Kongers to buy an apartment in nine cities in Guangdong province by exempting them from additional levies.

In Shenzhen, a city of about 12 million people that has some of the highest home prices in the nation, non-local Chinese residents have to pay five years of tax before purchasing a property, unless they have a residency permit. Residents of Hong Kong will now be able to buy as many as two apartments, tax free.

Why Hong Kong Is Still Protesting and Where It May Go: QuickTake

The reaction was swift, and blunt.

Mainland Chinese took to social media to complain about residential prices that are already too high and express anger they’re being treated as inferior.

“This rule will be challenged on the grounds of fairness,” said Zhu Wence, a Shenzhen-based property analyst. “Residents feel they contribute to the city, pay loads of tax and bear more stringent property curbs.”

Single? Not Paid Enough Tax? China Has a Home Ban for You

In Hong Kong, meanwhile, users of an online forum that’s become popular among protesters said they wouldn’t want to move to mainland China anyway. There’s simmering resentment toward Beijing for its anti-democratic policies.

The new measures come right in the thick of one of Hong Kong’s worst political crises. A Hong Kong student who fell in a parking garage near a protest earlier this week died on Friday, a development that could inflame demonstrations planned for this weekend.

To contact Bloomberg News staff for this story: Emma Dong in Shanghai at edong10@bloomberg.net;Shawna Kwan in Hong Kong at wkwan35@bloomberg.net

To contact the editors responsible for this story: Katrina Nicholas at knicholas2@bloomberg.net, David Scheer