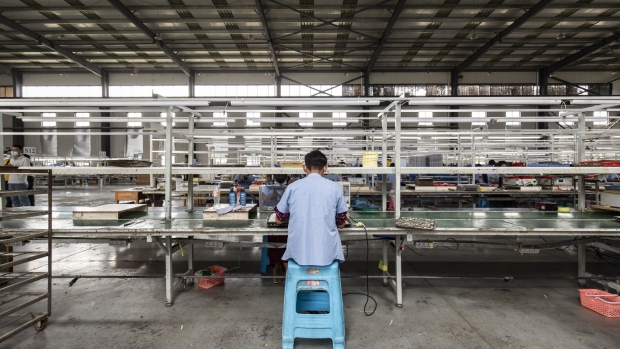 A worker on the assembly line for transistors at the Shanghai Electronic Components Co. facility at the Ruili Industrial Park in Ruili, Yunnan province, China, on Thursday, Aug. 11, 2022. Ruili, a Chinese city of a little more than a quarter-million people located on one of the only areas of flat land, is the exception. The city hugs the border, which divides it from Muse, a smaller city on the Myanmar side. Photographer: Qilai Shen/Bloomberg , Bloomberg

The first official data for September indicated that while manufacturing improved slightly, the services industry contracted for the first time since May as virus outbreaks and the Covid Zero policy continue to weigh on consumption. That suggests while the economy likely picked up from its near-contraction in the second quarter when Shanghai was in lockdown, there are no signs of strong recovery.

“The data show that the foundation for an economic recovery is still unstable,” said Bruce Pang, chief economist at Jones Lang Lasalle Inc. “Of the triple whammy of shrinking domestic demand, supply disruption and weakening expectations, consumption is the most prominent.” Government support policies should now focus on expanding and supporting domestic private demand, he said.

After a strong start to the year when the government set a optimistic growth target of around 5.5% this year, China’s economy has been buffeted by a series of blows since March. The housing market slump has worsened and cities continue to be locked down under tightened Covid controls.

“China’s September purchasing managers’ surveys on balance gave a little reassurance on the recovery. Manufacturing started to stabilize, with production lifting the sector into expansion for the first time since June -- a reflection of more stimulus and reduced power shortages. That said, demand gauges were weak and the non-manufacturing sector slowed -- underlining a drag from the property rout and Covid Zero policy.”

One bright spot is infrastructure spending, which the government is ramping up to help bolster growth. The official PMI survey on Friday showed the construction index climbed above 60 in September.

The economy is forecast to grow 3.5% this quarter from a year ago, according to the most recent survey by Bloomberg News -- up from 0.4% expansion in the second quarter, but still not fast enough to bring the growth rate anywhere close to the government’s target. Economists have been cutting their full-year estimates further below 4% and see a risk of next year’s growth failing to reach 5%.

The economy’s slump probably won’t reach a bottom until the first quarter of next year, when there’s likely to be some relaxation of the Covid Zero policies, Jacqueline Rong, deputy chief China economist at BNP Paribas SA, said in an interview on Bloomberg Television.

Chinese stocks fell along with a broader decline in Asian equities. The benchmark CSI 300 Index closed 0.6% lower on Friday.The yield on China’s 10-year government bond gained 1 basis point to 2.74%, while the onshore yuan strengthened 0.4% to 7.09 per dollar as of 4:36 p.m. local time.

China reported 712 new cases on Thursday, according to Bloomberg calculations based on government data. Cases have come well down from the spike over the summer but that is due at least in part to the restrictions in place, which are helping prevent transmission but are also damaging economic activity.

The controls on travel mean that there’s little expectation for a bump in spending during a weeklong holiday next week, with many regions asking people not to travel. The policy has also caused intermittent turmoil to supply chains, taken a toll on spending and damaged business confidence, with data earlier this week showing profits of industrial firms shrank in the first eight months of the year.

The country’s mobility restrictions are estimated to have shaved about 1.1 percentage points from China’s GDP growth in the third quarter as consumption weakened, according to Natixis SA.

This month, Chengdu was locked down for about two weeks, reviving memories of painful curbs in Shanghai this spring and once again threatening economic output. Other major cities such as Dalian and Lhasa were also locked down this month.

In addition to the Covid control policies which have hit confidence, the housing market has been slumping for more than a year, pushing some developers into default and slashing demand for steel, cement, paint and everything else needed to build apartments. Home prices slumped for the 12th straight month in August, and a plethora of measures -- such as loosening purchasing restrictions and down payments, and lowering mortgage rates for some residences -- haven’t been enough to resolve the crisis.

The latest was a late night announcement on Thursday that individual cities could further cut the interest rate on mortgages for first-time home buyers. However, analysts said this was likely to provide only limited help for the struggling housing market.

“I’m skeptical that it will have a large effect,” said Craig Botham, chief China economist at Pantheon Macroeconomics in London. “Rates and other restrictions have been eased several times already this year, with little discernible uplift to mortgage borrowing.”

It’s not the supply of credit that’s the problem, it’s the lack of confidence in the market, driven by falling prices and failing developers, compounded by a weak economic backdrop that weighs on employment and income, Botham added.

Demand from overseas for Chinese goods is also moderating: A gauge of new export orders in the official PMI fell to 47, the lowest in four months. The volume of exports from China’s biggest port in Shanghai already fell in August and the cost of shipping goods from the country has halved over the last three months as demand from the US and Europe for Chinese products slows because of high inflation and rising interest rates.

Some of the softening in demand reflects an earlier-than-usual peak season for companies importing goods. Historically, Chinese exports grow strongly into the second half of the year as companies in the US and Europe stock up before the holiday season. This year, the spike in shipments took place earlier, in May though July.

Until companies can shrink those inventories there’s unlikely to be a strong rebound in export demand, which had been the most reliable driver for Chinese growth during the pandemic.