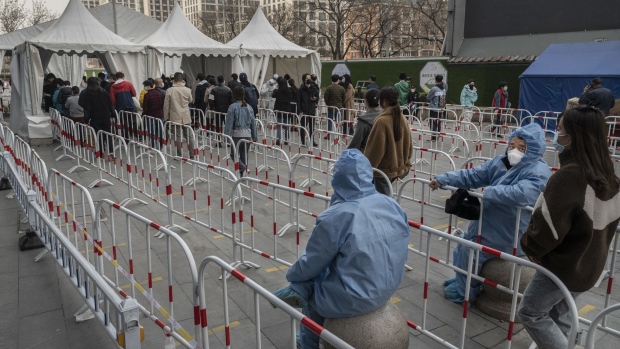 BEIJING, CHINA - MARCH 15: Security in protective suits sit outside the entrance to a nucleic acid mass testing site to prevent the spread of COVID-19 on March 15, 2022 in Beijing, China. China has stepped up efforts to control a recent surge in coronavirus cases across the country, locking down major cities like Shenzhen and Changchun and high risk areas and is carrying out mass testing in other centres as the country tries to maintain its zero COVID policy. (Photo by Kevin Frayer/Getty Images) , Photographer: Kevin Frayer/Getty Images AsiaPac

(Bloomberg) -- Just days into a Covid-19 lockdown that bars residents of Shenzhen from leaving their homes, China is allowing some companies to restart factories in the tech hub in a move that may provide a blueprint for shielding the economy and supply chains from the country’s virus fight.

iPhone maker Foxconn Technology Group is the most prominent, allowed to partially resume its operations in Shenzhen on Wednesday by deploying a so-called closed loop system. Workers are ferried from their company-run dormitory to the factory and back, subject to regular Covid testing and checks. Zhen Ding Technology Holding Ltd., a Taiwanese maker of printed circuit boards, is also operating a closed loop at its plant, along with a medical device company manufacturing essential goods that didn’t want to be named.

The system -- which effectively puts factory workers in a bubble, insulated from outside infection -- is also being used in nearby Dongguan, a manufacturing center that pumps out shoes, toys and textiles for export around the globe, but has restrictions in place to quell a virus outbreak, as well. On Thursday, a Shenzhen government official said factories will gradually be able to resume production in an “orderly manner.”

With economists increasingly warning about the hit to the world’s second-largest economy from lockdowns and other aspects of China’s Covid Zero strategy, such systems could help keep the engines of growth running while other curbs remain in place.

Plunged into a snap lockdown on Sunday as infections climbed, Shenzhen’s restaurants and subway are closed, its 17.5 million residents unable to leave the city limits for non-essential reasons. Whole neighborhoods are being sent to isolation sites under China’s policy of quarantining every Covid case. By deploying factory bubbles, the economic impact will be “significantly less,” said Paul Donovan, UBS’s global chief economist.

“The problem is that people hear “lockdown” and instinctively think of what happened in 2020,” he said. “That is not what is happening now.”

In the early days of the pandemic, China sealed off the original epicenter of Wuhan, with industry and manufacturing in the city shut down for months.

Still, as the outbreak was contained and Wuhan started to cautiously emerge from restrictions, it started to deploy similar moves to those now being rolled out in the south, with computer maker Lenovo Group Ltd. taking factory workers’ temperatures multiple times a day and isolating staff for testing. Such measures enabled China to emerge swiftly from the initial pandemic economic hit, despite fears restarting factories would contribute to the virus’s spread. The theory may be the same now.

As part of a vow to stabilize financial markets and stimulate the economy Wednesday, China also said virus controls should be coordinated with economic development. The comments, made at a meeting of China’s top financial policy committee, reiterated what has been a regular drumbeat from officials the past month that Covid policy needed to be tweaked to minimize disruption for business.

The closed-loop arrangement for Shenzhen’s factories appears similar to a bubble system China adopted during the Beijing Winter Olympics in February, where athletes and Games-related personnel were kept separate from the general public, only allowed to travel between sporting venues and their hotels via designated transportation. The system was successful in preventing any Covid spread from the Games within China.

There have been discussions about replicating the Olympic bubble for some events, Bloomberg News has reported, particularly as a way to allow foreigners to come into the country without the need for hotel quarantine, which is currently mandatory for all incoming travelers.

Michael Hart, president of the American Chamber of Commerce in China, said member companies had proposed similar setups to the Olympics model, where technical and training staff from abroad could fly into China and work alongside locals after a period of negative tests.

“I don’t know of any companies that have been able to execute this yet, but we’re hopeful that something like this could be approved on a case-by-case basis as a workaround to the current quarantine restrictions,” Hart said.

China has kept the virus at bay for most of the past two years using a combination of effectively closed borders, mandatory isolation of all virus cases and mass testing to limit outbreaks.

But more contagious variants like omicron are challenging the regime, which is becoming more disruptive as infections flare more regularly and the rest of the world opens up. China has has imposed more lockdowns over the past week than at any point in the pandemic, with Shenzhen, Langfang City near Beijing, the city of Changchun in the northeast and then its surrounding province, Jilin, all put under movement restrictions.

China Locks Down More Than 45 Million People as Covid Returns

Banks including Nomura Holdings Inc., and Morgan Stanley say China’s resource-intensive approach to containing Covid -- a strategy that has delivered one of the lowest death tolls globally -- damp the country’s growth outlook.

The closed-loop system may help individual manufacturers keep operating under Covid curbs, but it is unlikely to be a model of where China’s overall approach to the virus may be heading, said Louis Kuijs, Asia Pacific chief economist at S&P Global Ratings. “Most people in China do not work in factories, but in offices, shops, restaurants and the like. In those type of workplaces it is much harder to set up a closed-loop bubble.”

It may also not prove a panacea for factories, if the lockdown has halted logistics and deliveries.

Chinese logistics firm 4PX said on its website Monday that it had stopped picking up parcels from Shenzhen due to the Covid restrictions, while most online retail exporters have been disrupted by the measures, according to Wang Xin, head of the Shenzhen Cross-Border E-Commerce Association.