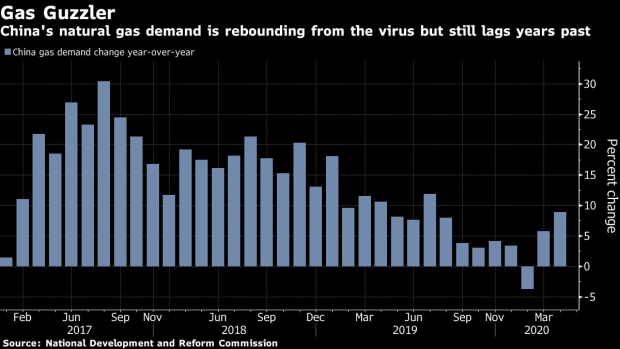 (Bloomberg) -- China’s top natural gas buyers have been directed by regulators to share import infrastructure, one of the broadest government efforts yet to enforce reform policies aimed at bolstering energy security and breaking down market barriers between the nation’s three state energy giants.

The move comes as the world’s biggest gas buyer nears the formation of a new nationwide pipeline network to transport the fuel freely across the country, part of its drive to replace coal in many applications with cleaner burning gas.

While the national network is still being finalized, the government of President Xi Jinping is already forcing state importers to cooperate and share facilities, seeking to avoid a repeat of the supply disruptions earlier this year during the worst of China’s coronavirus lockdowns.

The nation’s two biggest liquefied natural gas buyers, China National Offshore Oil Corp. and China National Petroleum Corp., have been using LNG import terminals operated by fellow state-owned giant Sinopec since May, as they grapple with high inventory levels at their own facilities, according to traders with knowledge of the matter. They plan to continue using them through September, said the traders, who asked not to be identified as the information isn’t public.

The cargo reshuffling demonstrates one of the benefits China’s policy makers were aiming for in forcing state-owned companies to offer access to their LNG terminals. This strategy will expand with the formation of National Oil & Gas Pipeline Group, which is expected to take over management of 10 terminals from the three firms. The new company, known as PipeChina, didn’t respond to a request for comment.

An independent pipeline system could also draw private investors into the state-dominated oil and gas drilling sector, helping to boost domestic supplies that the government sees as necessary to ward off import dependence.

To be sure, the companies have offered space to rivals before, but on a more limited basis. CNPC uses Sinopec’s Beihai terminal in southern China during the winter, while CNOOC and CNPC have struck access deals for their own terminals, according to BloombergNEF. About 87% of China’s current LNG import capacity is owned by the three national oil companies, BNEF said.

Details on the number of cargoes being diverted since May weren’t immediately available, though the traders said that they represent a small portion of the two firms’ total imports. The shipments are mainly going to Sinopec’s Tianjin and Qingdao terminals in North China, they said, adding that the ownership of the gas won’t change, as current pipeline connections between their systems mean they can still supply customers regardless of where the fuel entered the country.

Both CNOOC and CNPC earlier this year declared force majeure on prompt deliveries due to infrastructure and demand constraints caused by Covid-19. While consumption has improved since the government lifted lockdown orders, Chinese buyers are still struggling to digest a steady flow of deliveries from long-term suppliers.

China’s overall gas imports in the first five months of the year have shown meager growth of about 1.9%, compared with almost 7% for all of last year and almost 32% in 2018. The cut back is being seen mainly for pipeline supplies, which dropped 5.9% over the period, compared with a 7% gain for LNG.