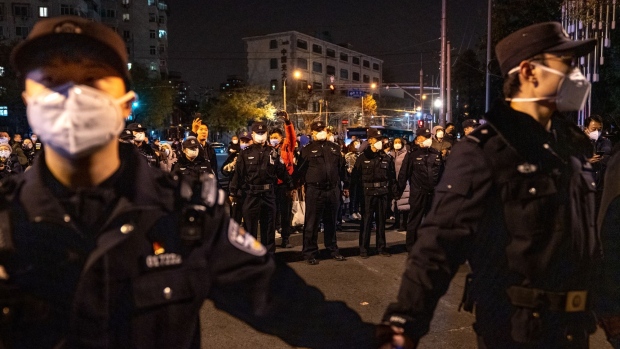 (Bloomberg) -- China formally arrested nine people in connection with a wave of Covid protests that swept the country in November, a human rights group said, even as Beijing unwinds the virus curbs that prompted the demonstrations.

Municipal prosecutors in Beijing have approved the arrests of nine people suspected of participating in demonstrations in the capital, according to Weiquanwang, a website that tracks human rights cases in China. They’re accused of “picking quarrels and provoking trouble,” the site said Friday, without disclosing where it got the information.

The catch-all charge, often used against dissidents in China, carries a possible sentence of as long as five years in prison. The arrested people named by Weiquanwang include Cao Zhixin, a book editor in her mid-20s, who questioned the detentions of her friends in a video widely circulated on the internet earlier this month.

Neither the Ministry of Public Security nor the Beijing Municipal Public Security Bureau immediately responded to requests for comment Wednesday, a public holiday in China. Weiquanwang also didn’t respond to a request for comment.

The arrests are the latest sign that China is quietly pursuing people associated with the demonstrations now that international attention has faded. The historic street gatherings and vigils began at the end of November, with some participants calling for freedom of speech or even for Chinese President Xi Jinping to step down.

The government took steps in the immediate aftermath of the demonstrations to roll back most of the measures to enforce Xi’s signature policy of isolating and quashing Covid outbreaks. Still, Chinese authorities have said little about the protests, although Xi made a rare acknowledgment of divergent views in his New Year’s address to the nation.

More than 100 demonstrators may have been detained, Weiquanwang said earlier, citing “various avenues” and other civil-society groups. At least 12 people were in custody, Bloomberg News reported Jan. 15, citing people with knowledge of the matter.

Despite the tight censorship, news about the detentions still seep through the cracks. One internet user said on the Twitter-like Weibo that he was glad about the arrests, which received 27,000 likes, while another post said her wish for the Lunar New Year holiday was for the detainees to be released and reunited with their families.

Chinese police normally have two months after they make an arrest to investigate and refer a case back to prosecutors, who must then decide whether to pursue trial.