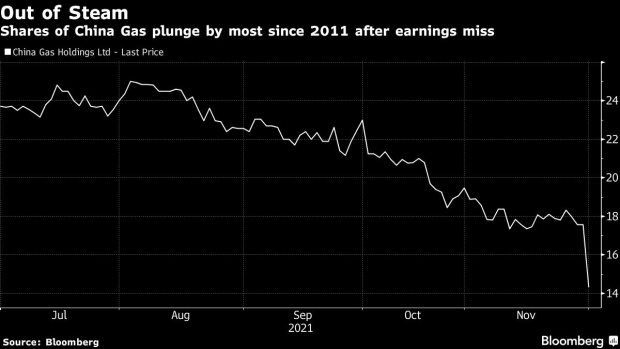 (Bloomberg) -- Shares of China Gas Holdings Ltd. slumped by the most in a decade, after the company reported six-month earnings that Citigroup Inc. said were a “big miss” led partly by China’s housing market slowdown.

The company’s stock dropped as much as 17% in Hong Kong, the steepest since August 2011, after announcing its net income for the six months ending in September fell 19% year on year.

The gas distributor’s half-year earnings represented only about a third of Bloomberg consensus estimates for the full reporting year, Citigroup analysts including Pierre Lau wrote in a note. They attributed the disappointing performance to few household connections amid China’s weakened property market and delayed government payments in rural areas.

China Gas “has more city gas projects in relatively small cities (in terms of population and project) hence is more vulnerable to property market downside risk than those focusing more on big cities,” they added.