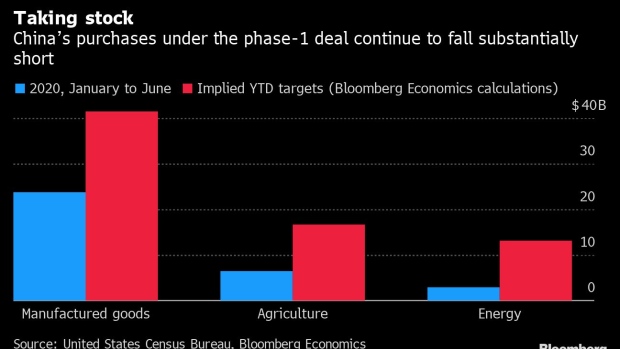 (Bloomberg) -- U.S. oil exports to China are set to reach a record next month in a sign that Beijing is stepping up purchases to meet its commitments under a landmark trade deal reached earlier this year.

Chinese crude buyers have chartered about 19 tankers for September to send roughly 37 million barrels of oil to China, according to provisional tanker fixtures. If these proceed as planned, the exports would surpass a record set in May at 35.2 million barrels, according to U.S. Census data compiled by Bloomberg. The May volume was also the most by any U.S. oil buyer for a given month, data show.

Under phase one of the deal, the world’s largest oil importer promised to buy an additional $200 billion of U.S. goods and services in 2020 and 2021, including $52 billion in energy products, in an agreement signed in January. Purchases so far have lagged that target. A review of the deal that was set for for August 15 was canceled, and has yet to be rescheduled.

All but one of the tankers, which can carry about 2 million barrels each, will originate on the U.S. Gulf Coast. Unipec, the trading arm of Chinese’s largest refiners Sinopec, has booked some of those tankers, while a few others were chartered by PetroChina Co Ltd, a subsidiary of China National Petroleum Corp.

Still, fixtures can get canceled or rerouted if market fundamentals change.