Beijing is gearing up to use its dominance of rare earths to hit back in its deepening trade war with Washington.

A flurry of Chinese media reports on Wednesday, including an editorial in the flagship newspaper of the Communist Party, raised the prospect of Beijing cutting exports of the commodities that are critical in defense, energy, electronics and automobile sectors. The world’s biggest producer, China supplies about 80 per cent of U.S. imports of rare earths, which are used in a host of applications from smartphones to electric vehicles and wind turbines.

The threat to weaponize strategic materials ratchets up the tension between the world’s two biggest economies before an expected meeting between Presidents Xi Jinping and Donald Trump at the G-20 meeting next month. It shows how China is weighing its options after the U.S. blacklisted Huawei Technologies Co., cutting off the supply of American components it needs to make its smartphones and networking gear.

“China, as the dominant producer of rare earths, has shown in the past that it can use rare earths as a bargaining chip when it comes to multilateral negotiations,” said George Bauk, Chief Executive Officer of Northern Minerals Ltd., which is producing rare earth carbonate from a pilot-scale project in Western Australia. 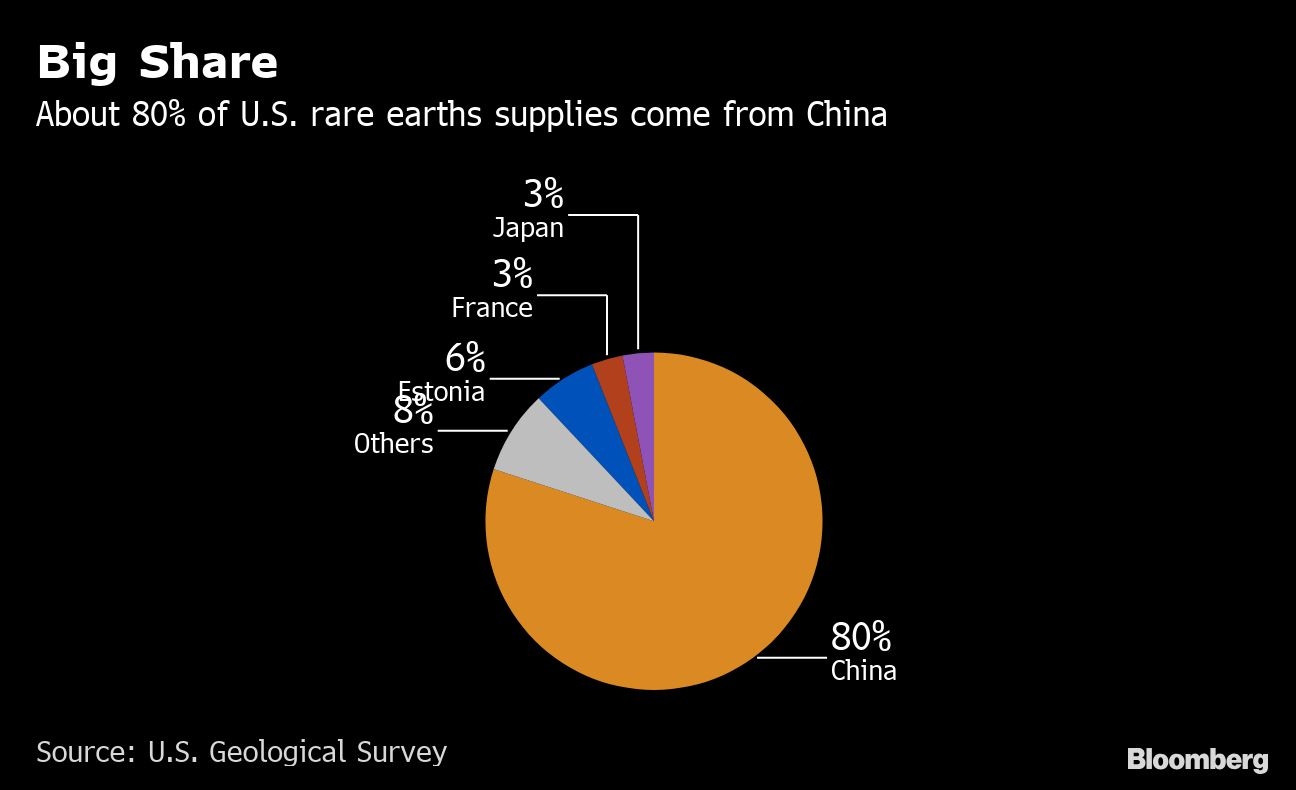 The U.S. shouldn’t underestimate China’s ability to fight the trade war, the People’s Daily said in an editorial Wednesday that used some historically significant language on the weight of China’s intent.

The newspaper’s commentary included a rare Chinese phrase that means “don’t say I didn’t warn you.” The specific wording was used by the paper in 1962 before China went to war with India, and “those familiar with Chinese diplomatic language know the weight of this phrase,” the Global Times, a newspaper affiliated with the Communist Party, said in an article last April. It was also used before conflict broke out between China and Vietnam in 1979.

On rare earths specifically, the People’s Daily said it isn’t hard to answer the question whether China will use the elements as retaliation in the trade war.

China is “seriously” considering restricting rare earth exports to the U.S. and may also implement other countermeasures, the editor-in-chief of the Global Times, said in a tweet. An official at the National Development & Reform Commission told CCTV that people in the country won’t be happy to see products made with exported rare earths being used to suppress China’s development.

Editorials in the Global Times and Shanghai Securities News took similar tacks in their Wednesday editions. 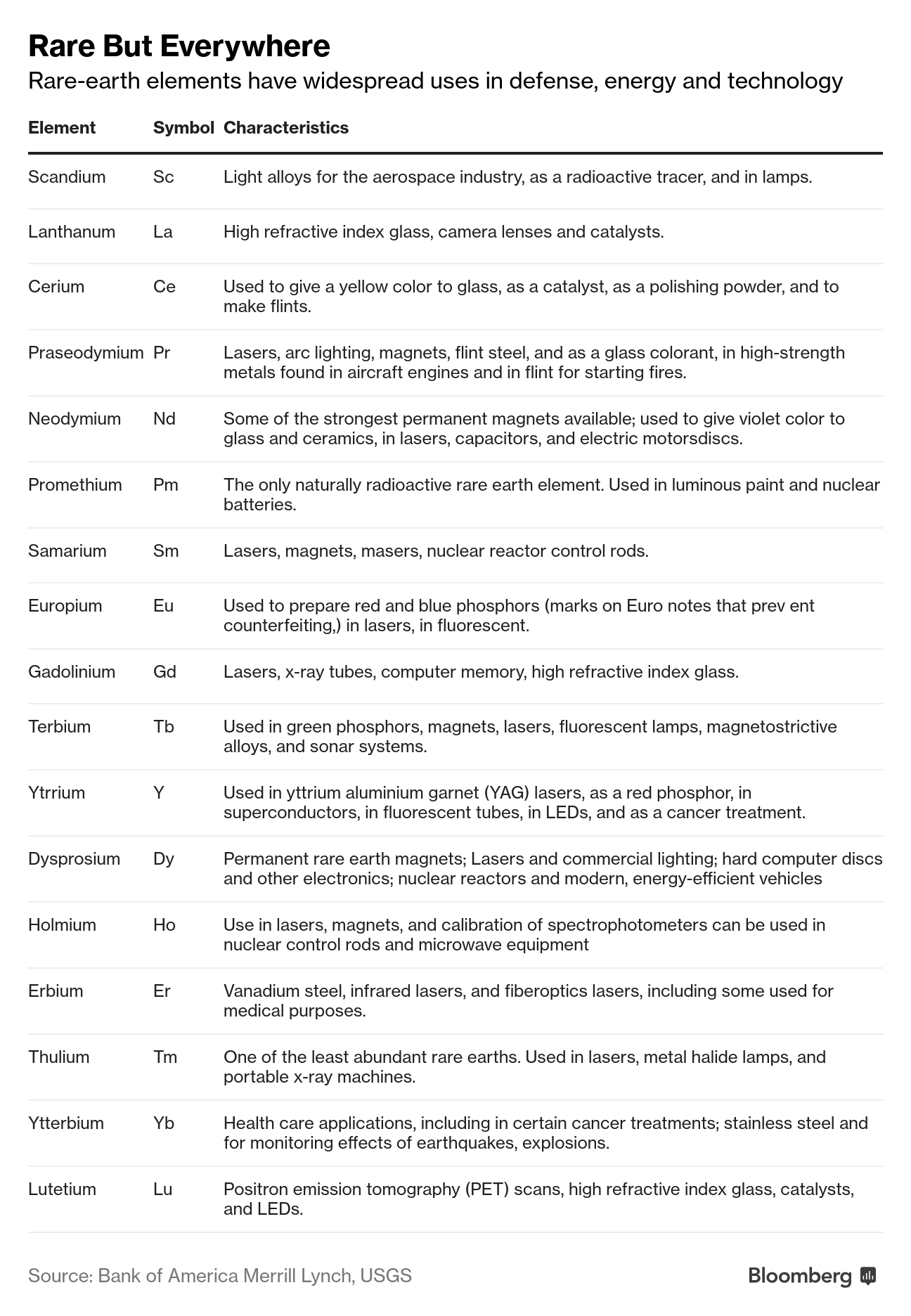 What our analysts are saying:

The U.S. will continue to rely on importing rare-earth minerals from China, the materials used in key components for a wide variety of products including electronics, hybrid vehicles and energy-storage systems. Importing from China is cheaper than producing domestically in the U.S.--  Yi Zhu, Bloomberg Intelligence senior analyst in May 21  report

The nation’s producers have rallied hard in recent weeks on the view that rare earths could be an ace in the trade war. President Xi Jinping visited a plant earlier this month, accompanied by his chief trade negotiator with the U.S., fueling speculation that the strategic materials could be weaponized in China’s tit-for-tat with the U.S.

Rare earths have already featured in the trade dispute. The Asian country raised tariffs to 25% from 10% on imports from America’s sole producer, while the U.S. excluded the elements from its own list of prospective tariffs on roughly $300 billion worth of Chinese goods to be targeted in its next wave of measures.

Rare earths aren’t particularly rare. Cerium, the most abundant, is more common in the Earth’s crust than copper. All other rare-earth elements, besides promethium, can be found more widely than silver, gold, or platinum, according to the U.S. Geological Survey. However, concentrated and economic deposits are scarce, and production is dominated by a handful of countries. China is the biggest by far, accounting for almost 70 per cent of global production and 40% of the world’s reserves, USGS data show.

China’s rare earth market is dominated by a handful of producers including China Northern Rare Earth Group, Minmetals Rare Earth Co., Xiamen Tungsten Co. and Chinalco Rare Earth & Metals Co. The nation has form in using the elements to make a political point. It blocked exports to Japan after a maritime dispute in 2010, although the consequent spike in prices saw a flurry of activity to secure supplies elsewhere, which would be the risk again if Beijing follows through with its threat of retaliation.

China’s stranglehold is so strong that the U.S. joined with other nations earlier this decade in a World Trade Organization case to force the nation to export more amid a global shortage. The WTO ruled in favor of America, while prices eventually slumped as manufacturers turned to alternatives.

In December 2017, U.S. President Donald Trump signed an executive order to reduce the country’s dependence on external sources of critical minerals, including rare earths, which was aimed at reducing U.S. vulnerability to supply disruptions. 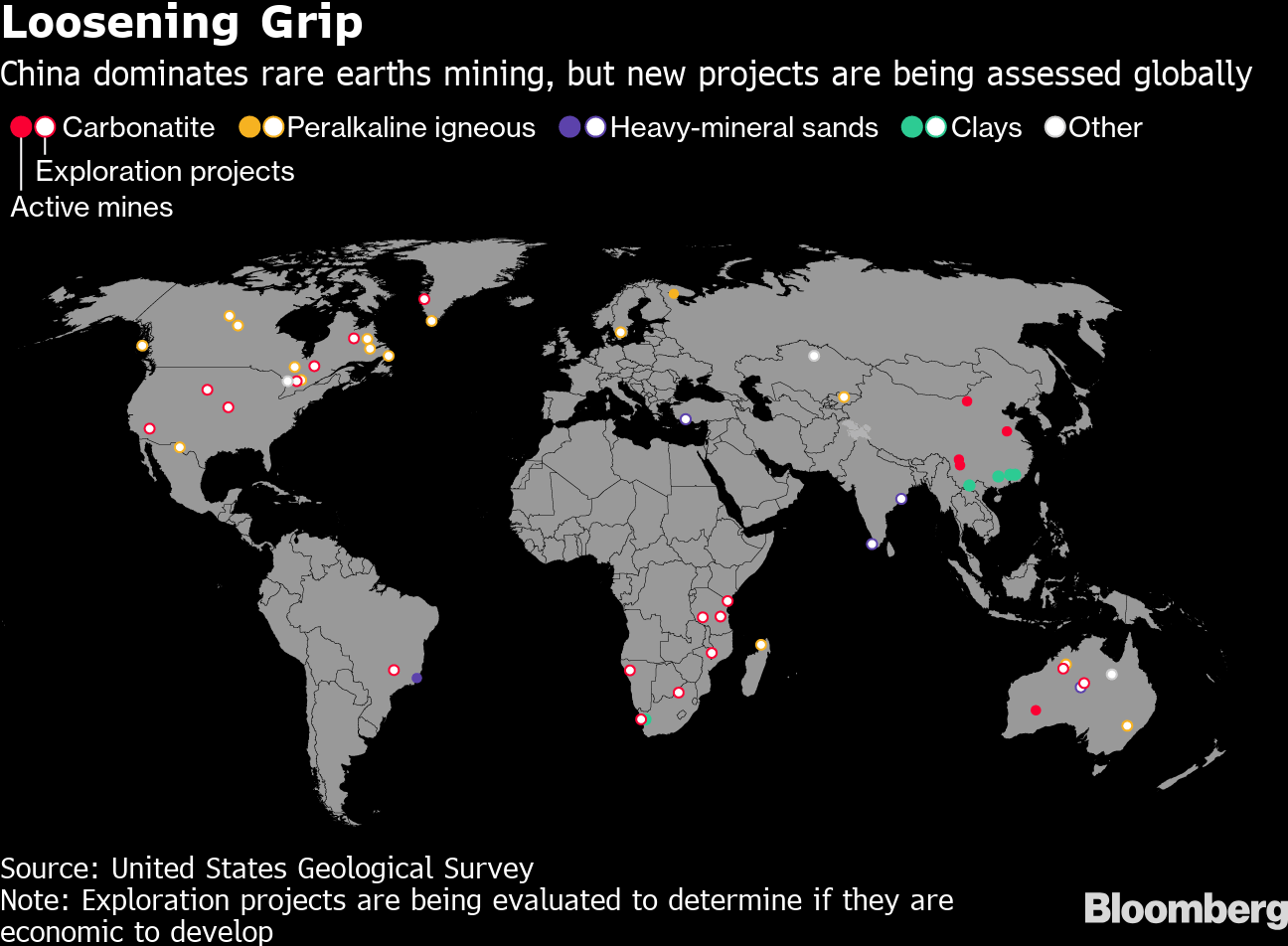