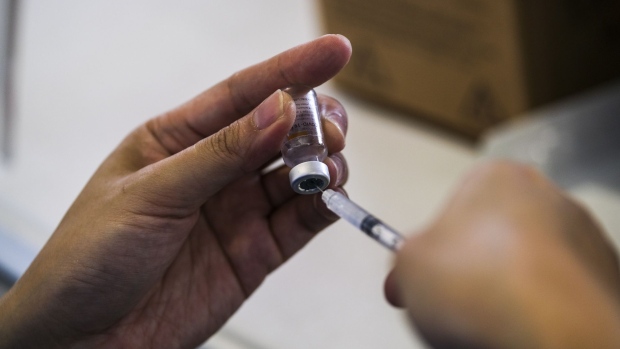 A health worker prepares a dose of the Sinovac Biotech Covid-19 vaccine at avaccination site set up inside the Marikina Sports Complex in Marikina City, Metro Manila, the Philippines, on Friday, Aug. 6, 2021. The Philippines capital region is under a strict lockdown called enhanced community quarantine, most businesses are shut and only essential shops like supermarkets and pharmacies can fully operate. Photographer: Veejay Villafranca/Bloomberg , Bloomberg

(Bloomberg) -- China started giving Covid-19 vaccines to children as young as three, as the country grapples with the return of the delta variant and more frequent virus outbreaks.

Multiple places across China are rolling out vaccines to children aged between three and 11, according to reports in local media. The shots, developed by homegrown drugmakers Sinovac Biotech Ltd and state-owned Sinopharm, have already been administered to those aged 12 and above, with the country green-lighting their use in those aged over three in June.

China has one of the highest vaccination rates among major economies, with 75% of its 1.4 billion people fully inoculated. The country is now rolling out booster shots, with adults who had their first doses six months ago now eligible.

The moves come as China tries to quash its latest outbreak, with flareups of the virus coming more frequently than they did before delta made its way in. Still, Beijing remains committed to its zero-tolerance Covid strategy, which has kept borders closed and quarantines in place even as other nations that initially pursued elimination start to pivot toward reopening their economies and living with the virus.

The latest delta outbreak has quickly expanded from its initial cluster in China’s northwest to around a dozen provinces. The country reported 35 locally-acquired Covid infections Tuesday, four in the capital Beijing. In a cluster in southwestern Fujian province in September, the more contagious strain spread among unvaccinated elementary school students, though many only developed mild symptoms.

The last group to be targeted for vaccination, children have been swept up in the latest delta wave globally, prompting health authorities to either clear or consider rolling out shots. The mRNA vaccine co-developed by Pfizer Inc and BioNTech is 91% effective at preventing Covid in children aged 5 to 11, a study showed, and the U.S. is planning to make shots available to that age group, pending approval by the Food and Drug Administration.

The shots being given to children in China use more traditional inactivated vaccine technology. The United Arab Emirates cleared Sinopharm’s vaccines for kids as young as three in August. Argentina is also vaccinating 3 to 11-year-olds with Sinopharm. Chile, which has relied heavily on Sinovac for its wider rollout, is now administering it to children six and above.

Public data on the Chinese shots’ efficacy in children is minimal, however, with Sinovac planning a clinical trial for kids in South Africa, according to News24. Brazil’s drug regulator rejected an application for the Sinovac shot to be used in minors in August, asking for more recent data on the performance of the vaccine.