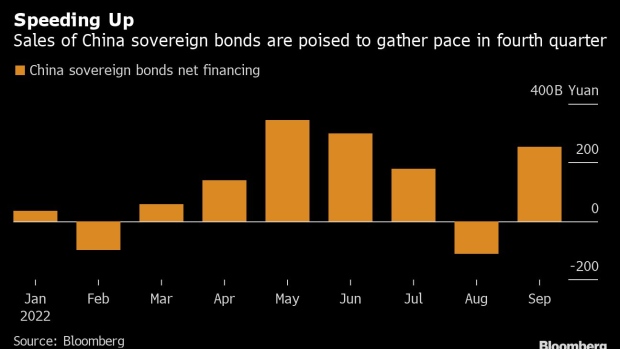 Pedestrians at a street market in Dali, Yunnan province, China, on Friday, Sept. 9, 2022. Dali, a city of just over half a million, has long been known as a backpackers’ paradise, with a touristy Old Town where travelers can find cheap lodging, Western-style bars and southeast Asian cuisine. Photographer: Qilai Shen/Bloomberg , Bloomberg

(Bloomberg) -- China’s government is expected to sell bonds worth more than $340 billion for the rest of this year, according to Bloomberg calculations, as it taps the remaining annual quota and refinances maturing special bonds.

A total of 2.45 trillion yuan in sovereign bonds will likely be issued in October-December, made up of about 1.66 trillion yuan of new bonds and nearly 786 billion yuan to refinance some maturing special debt.

The central government has issued 1.09 trillion yuan of general bonds so far this year, according to Bloomberg-compiled data. That’s less than 40% of the budgeted central deficit of 2.75 trillion yuan for 2022. Separately, two special notes first issued in 2007 to set up China’s sovereign wealth fund are coming due in November and December, respectively.

The pace of sovereign bond issuance has lagged that of special local bonds, which are mainly used for infrastructure investment, likely because the government tried to stagger the bond supply to avoid shocks to the market. Almost all of this year’s 3.65 trillion yuan of special bond quota has been used as Beijing relied on infrastructure construction to boost an economy battered by Covid outbreaks and a housing market slump.

The move came amid deepening pessimism about the outlook of the Chinese economy, with analysts downgrading their growth forecasts for this year to 3.4% and 2023’s to 5.1%, far below the government’s target of around 5.5%.