China has big plans for its rapeseed bounty in Sichuan. Levering off its famed cuisine, the top producing province wants to harvest more of the oilseed for a branded cooking oil, just as the outlook for imports clouds over due to a dispute with Canada, its biggest supplier.

The southwest province, whose spicy dishes rely on the area’s dark rapeseed oil, will spend 500 to 600 million yuan (US$89 million) over three years to grow, process and promote a local brew called “Tianfu Rapoil,” officials said last week. Sichuan, which is also known as Tianfu -- or land of abundance -- produces nearly 3 million tons of the oilseed a year out of a national total of about 13 million.

Not only will the government-sponsored plan help lift farmers out of poverty, it will also boost incomes generally as fields of the vivid yellow crop in bloom are a potential tourist draw, according to Wang Hailin, deputy head of the Sichuan Food and Strategic Reserves Bureau. As well as its food, the province attracts visitors for its panda sanctuaries.

Fifteen local plants, both private and state-owned, will form an alliance to make the Tianfu product, according to Jiang Minjie, general manager of Chengdu New Shine Oil and Grain Co. He said that Sichuan’s rapeseed oil already commands twice the price of oil elsewhere in China, which often uses Canadian canola, the crop’s name in North America. 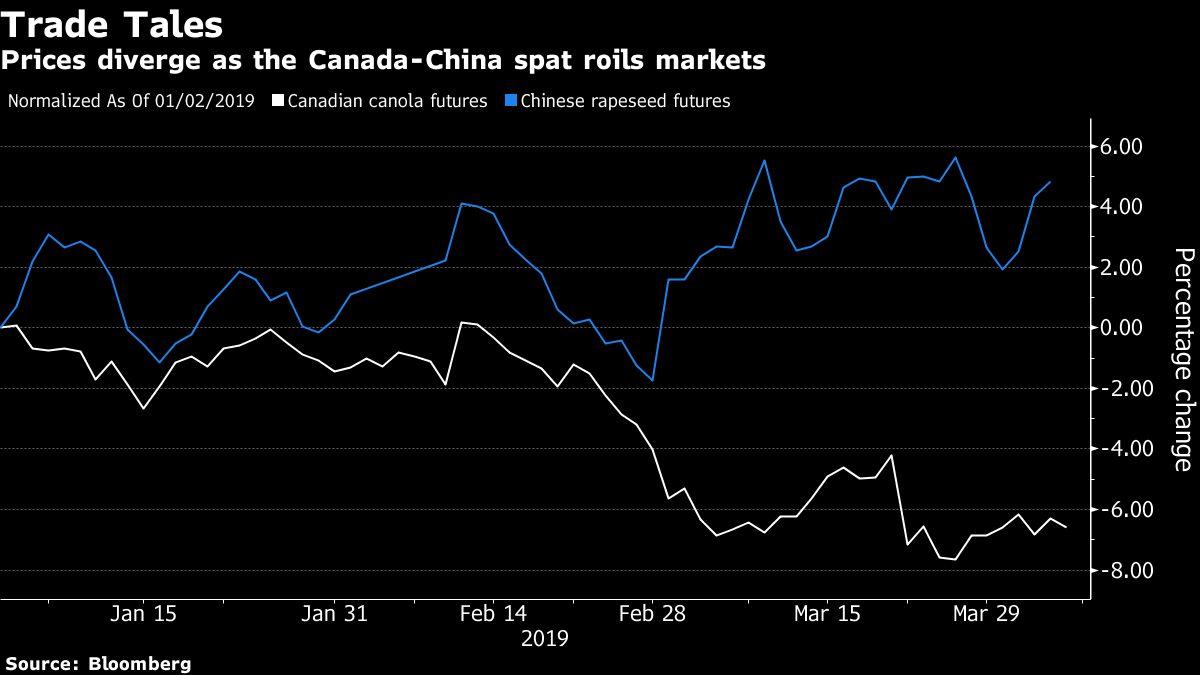 Those shipments have been cast into doubt after China suspended exports from three Canadian suppliers blaming pest infestation, although others have concluded that the nation is being punished for its detention of a Huawei Technologies Co. executive in December. Exporters who haven’t been sanctioned are still being shunned by Chinese buyers, who fear lengthy port delays as cargoes are tested, said Zhang Liwei, a senior analyst with the China National Grain and Oils Information Center.

The slump in shipments has hurt prices in Canada and boosted the market in China, which also purchases the oilseed from Australia, Mongolia and Russia.

Buyers are scouring other markets for suppliers, said Fang Gang, a trading manager with Yihai Kerry Group, owned by Singapore’s Wilmar International Ltd. He said China may look at raising its imports from Ukraine, Russia and Kazakhstan, which together produce about 5 million tons of the crop a year, most of it for overseas sale and at less cost.

Price is likely to be the key test of Sichuan’s ambitions for Tianfu Rapoil. If trade with Canada returns to normal, its cheaper product will be a big challenge for the brand, according to Wang Xiaokang, general manager of Sichuan Province Grain and Oil Co. Wang said the province’s rapeseed production could rise by more than 100,000 tons as the Tianfu plan is put into effect.