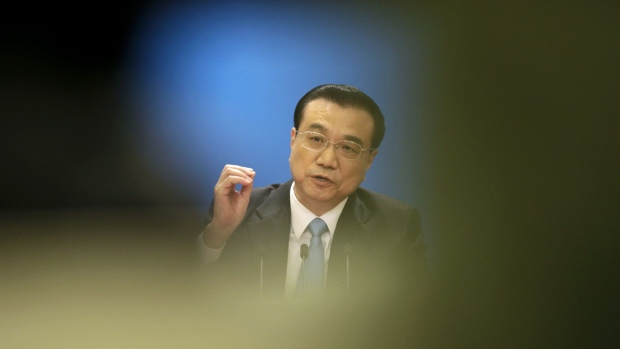 Li Keqiang, China's premier, speaks during a news conference following the closing of the First Session of the 13th National People's Congress (NPC) at the Great Hall of the People in Beijing, China, on Tuesday, March 20, 2018. Li said that China wants to avoid a trade war and that the government plans to further open the manufacturing sector -- and that it won't force foreign companies to transfer technology to domestic ones while doing so. , Bloomberg

At a meeting on stabilizing markets and jobs, Li said China would strengthen macro-policy adjustments and called on government agencies to act with a greater sense of urgency and implement policies faster, according to CCTV.

New measures should be adopted as soon as this month to ensure the economy is in a “reasonable range” for the first half and the rest of the year, the report cited Li as saying, without elaborating.

Data this week showed China’s industrial output and consumer spending sliding to the worst levels since the pandemic began as the government battles Covid outbreaks with strict lockdowns that are having a major impact on activity. Unemployment climbed to 6.1% in April and the youth jobless rate hit a record high. Analysts have warned of no quick recovery.

China has set a full-year economic growth target of 5.5%. Goldman Sachs Group Inc. just cut its forecast for this year to 4% from 4.5%.

At Wednesday’s meeting with officials in Yunnan province, Li said steps would be taken to stabilize land and property prices to ensure the healthy development of the property market. Housing demand will be supported, he said, according to CCTV. The central bank cut mortgage rates for first-time homebuyers on Sunday.

The Chinese premier also reiterated support for digital-economy companies and their public listings, echoing comments made by Vice Premier Liu He after a symposium with the heads of some of the nation’s largest private companies.