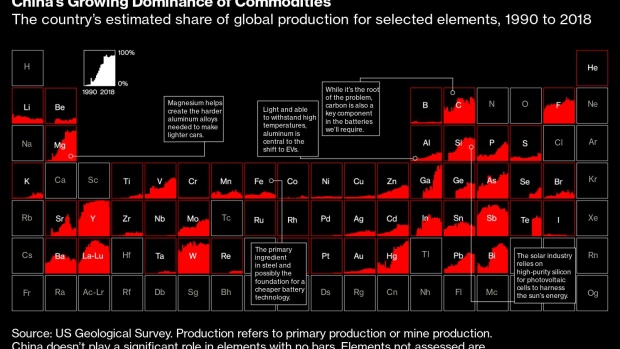 (Bloomberg) -- China has built up stakes in more than two dozen Canadian mining companies, including some of the industry’s biggest names. Canada’s latest crackdown on foreign investments in critical minerals is about to put a chill on such activity.

At least 27 public companies including Teck Resources Ltd., Ivanhoe Mines Ltd. and First Quantum Minerals Ltd. have shareholders with ties to China, according to data compiled by Bloomberg. Attracting such investors -- or encouraging them to increase their holdings -- will now be much harder given Canada’s latest efforts to protect its minerals wealth.

“Canada has said it doesn’t want to see injections of capital from state-influenced investors,” said Subrata Bhattacharjee, who specializes in foreign investment law at Borden Ladner Gervais LLP. “That’s going to leave some mining companies in a bind in terms of finding alternate sources of financing.”

Chinese firms have been involved in 89 announced acquisitions and investments in Canadian metals and mining companies in the past decade, according to data compiled by Bloomberg. The value of those transactions is $14 billion. Many deals involve companies tied to the 31 critical minerals identified by Canada.

Metals such as lithium, copper, nickel and cobalt are essential ingredients for electric-vehicle batteries, solar panels and wind turbines -- and securing access is key in reducing risks of supply bottlenecks and shortages. Canada has been working with the US and other friendly nations to develop supply chains for these minerals and reduce dependence on China, which dominates the industry and has stakes in resource firms far and wide.

Gold producers also count the Chinese government and entities as shareholders, though they have insignificant investments.

Canada announced tougher rules around investments in the country’s critical minerals last month, making it harder for foreign state-owned enterprises to pursue takeovers or invest in the industry. Any transactions in the sector now face “rigorous” national security oversight if they have such foreign involvement.

“The Canadian government is taking a harder line on investments, not just by state-owned companies but also companies with links to foreign governments,” said Sandy Walker, a Toronto-based mining lawyer at Dentons. “You could be a private investor and still be considered a state-owned enterprise or at least subject to the influence of a foreign government.”

“The entire Canadian lithium sector has now lost the support of really the major player in the space,” Lithium Chile Chief Executive Officer Steven Cochrane said in an interview. “The impact is going to be felt by everybody.”

--With assistance from Brian Platt, James Attwood and Doug Alexander.