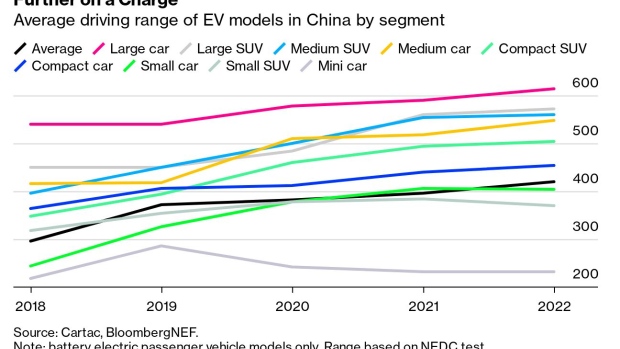 China just reported electric-vehicle sales data for October, and the numbers continue to break records. A total of 722,000 plug-in passenger and commercial vehicles were sold. Battery-electric vehicles were 22% of the passenger car market, and plug-in hybrids claimed another 9% share.

Analyzing China’s EV market takes up a growing share of our time at BloombergNEF, mostly because China represents an ever-growing portion of the global EV market. China’s share of global passenger EV sales has gone from 26% in 2015, to 48% in 2021, to 56% in first half of 2022. We’re expecting a big surge in the final months of the year that could push the share north of 60%. In other segments like trucks, buses and two-wheeled vehicles, China is even further ahead.

Last month, we covered how China’s commercial vehicle market is now picking up speed. This week, I’m highlighting some new analysis by my colleague Siyi Mi in our Beijing office that goes into more detail on the trends within the passenger vehicle market there. Here are five takeaways from her recent report:

1) Average EV range is rising steadily. There are now almost 250 different battery-electric models for sale in China’s passenger car market, and the average range of models sold so far this year was 420 kilometers(1)(261 miles). That average figure hides a lot of variation, with mini cars below 250 kilometers of range on average and large cars and SUVs pushing well over 500 kilometers. Average range across all segments has risen 42% since 2018.

2) Lithium-ion phosphate (LFP) batteries keep taking more market share. LFP batteries contain no cobalt or nickel and generally cost less than other types of EV batteries as a result. The number of new EV models in China that use LFP batteries is rising quickly and now accounts for half of all models launching in the market. Many of these models are high-volume sellers, so the actual share of shipped units is already well above that threshold. More automakers are adopting the chemistry to help keep a lid on costs. This is leading to major downward revisions in forecast demand for cobalt and highlights how the EV market is able to adapt to different price dynamics and external pressures. Other automakers outside of China are starting to follow suit and setting the stage for even higher levels of LFP adoption globally in 2023.

3) The efficiency of EVs in China is improving slowly but steadily. Despite rising average ranges and associated battery pack sizes, the average efficiency of EVs has improved by about 2% per year since 2018. That’s mostly due to more efficient motors and power electronics, better thermal management systems and efforts to cut weight in other parts of the car. The largest vehicles have seen the biggest improvements, despite their average battery pack sizes increasing over this period. There’s probably still more room to run here, with more dedicated EV architectures launching in the years ahead, more cell-to-pack and cell-to-chassis battery designs and other advancements.

4) Plug-in hybrids (PHEVs) are taking off in the larger vehicle segments. While plug-in hybrid sales are slowing in Europe and never really took off in North America, they’re finding real traction in the larger vehicle segments in China. PHEVs hit 15% of sales in the large car segment and nearly 25% in the large SUV segment from January to August. Part of this is because high battery prices are making it difficult to fully electrify larger, heavier vehicles while keeping them cost-competitive. Chinese automakers also have provided much higher electric range on their PHEVs than most global brands, many of which treated PHEVs primarily as a compliance tool to meet emissions targets rather than designing them around consumer needs. Plug-in hybrids are also emerging as a popular choice in regions where public charging infrastructure is not as developed. The sales patterns in China show that the technology is certainly not dead yet and likely still has a role to play. The biggest challenge is ensuring they’re actually charged.

5) EV sales are spreading beyond the biggest cities. Places like Shanghai and Beijing have had high EV adoption rates for several years now, due in part to city-level policies that restrict the number of new license plates issued. EVs were exempt from some of these restrictions, making them a popular choice in China’s megacities. These cities also have clusters of local automakers and component suppliers, good charging infrastructure and other incentives helping drive EV adoption. But the last two years have seen EV sales spreading quickly into smaller cities and towns, highlighting that electrification isn’t just a big city phenomenon.

China’s EV market is a fascinating example of how fast technology can change, and there will certainly be more interesting developments ahead. BNEF clients can access the full report on EV trends in China here.

--With assistance from Siyi Mi.

(1) Ranges are based on the NEDC test cycle. Real-world driving range will be lower.