We have to make better use of our trade resources by redeploying them away from China: Fmr. Canadian ambassador to China

China’s purchases of U.S. goods increased last month as the economy continued its recovery from the coronavirus shutdowns, but imports are still far behind the pace needed to meet the terms of the ‘phase one’ trade deal.

By the end of May this year, China had only bought about 19 per cent of the total purchase target of more than US$170 billion for goods in 2020, according to Bloomberg calculations based on Customs Administration data. That means China needs to buy about $139 billion in the remainder of the year to meet the terms of the agreement signed in January.

China promised to purchase an additional US$200 billion of U.S. goods and services over the 2017 level by the end of 2021 in the agreement that paused a bruising trade war between the world’s two largest economies. The deal is in focus as one of the few bright spots in U.S.-China relations as the superpowers slide into a broadening strategic confrontation.

China will have to increase purchases “significantly in the coming months to meet the buying targets,” said Michelle Lam, greater China economist at Societe Generale SA in Hong Kong. But as long as China keeps buying, markets could stay calm, she added. 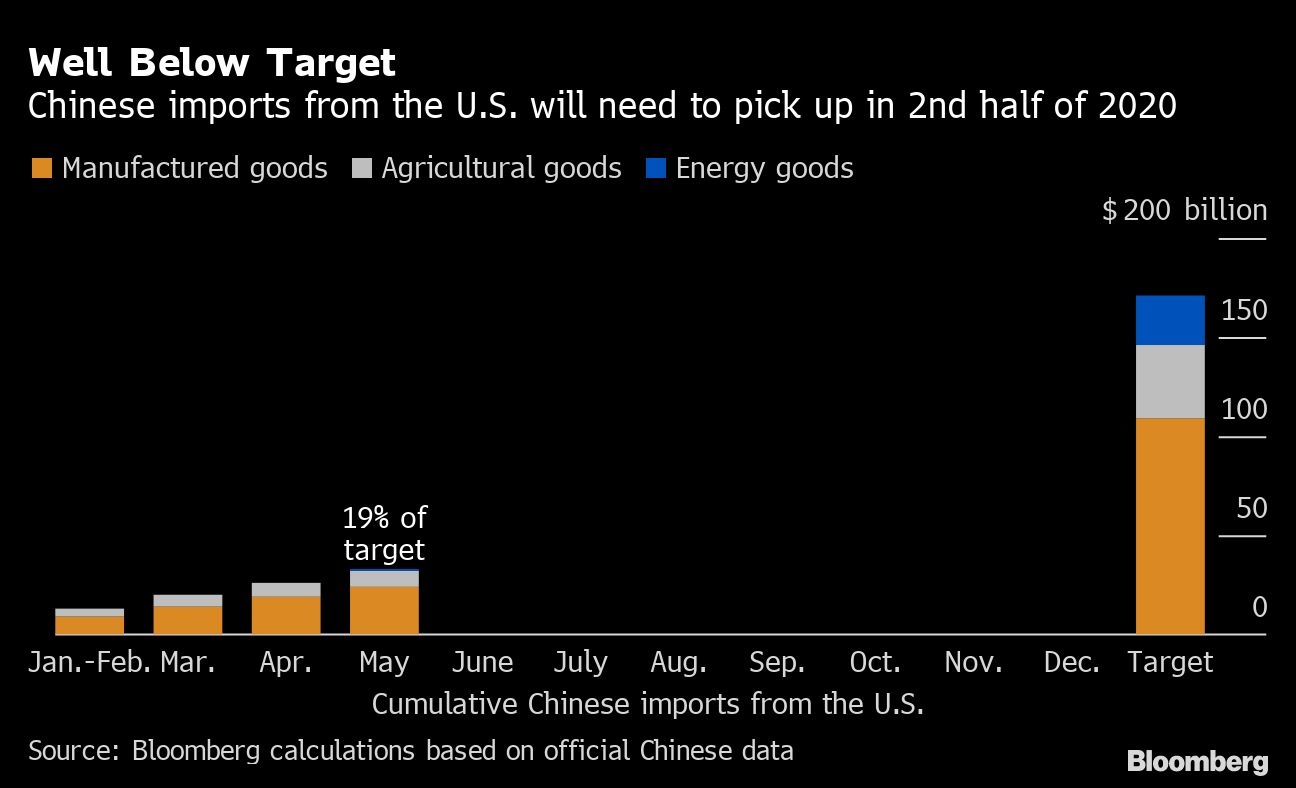 While purchases of energy products are only at about three per cent of where they need to be by year-end, there was a significant jump in the imports of those commodities in May. China imported more meat than in April or March, making up for a slowdown in soybean shipments, the data show.

In manufactured goods, aircraft orders and deliveries surged more than ten-fold in May from from April, and purchases of integrated circuits were above $1 billion again.

Last week, financial markets plunged after an adviser to President Donald Trump made comments that were interpreted as meaning the trade deal was “over”. The President soon clarified that the deal was “fully intact,” but the market reaction underlined the uncertainty about both the agreement and the broader relationship.

“China is likely to lean on agriculture and manufactured goods, as low energy prices and travel restrictions make the 2020 pledge impractical to meet. The burden to reach the import goal could rest on soybeans, meat and industrial, electrical and other manufactured goods as the country stimulates a domestic demand recovery.” —Steven Lam, Bloomberg Intelligence

Following a meeting this month between top diplomats from both sides, China said it plans to accelerate purchases of American farm goods, according to people familiar with the matter.

China has “actually picked up their game, it’s not just commodity buying, although that’s picking up too,” President Trump’s top economic adviser Larry Kudlow said in Fox Business interview last week. “The trade deal is on, no question about it,” Kudlow said.

The phase-one agreement says that official data from both China and the U.S. will be used to determine whether promises have been met.

“What matters is the marginal progress rather than absolute percentage,” said Tommy Xie, an economist at Oversea Chinese Banking Corp in Singapore. The latter “is lagging due to the disruption from COVID-19.”