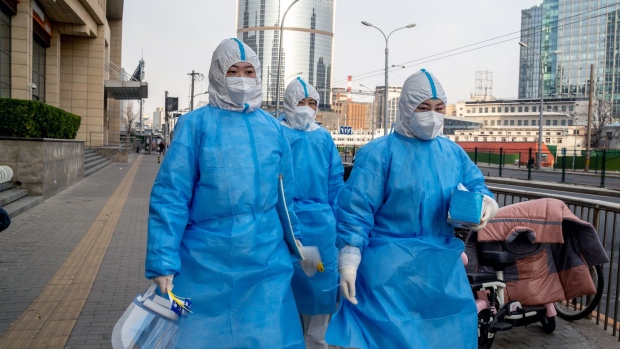 Workers in protective gear in Beijing, China, on Monday, Nov. 28, 2022. Covid-19 cases in China's capital remain elevated, after almost doubling at the weekend, as opposition to the government’s hardcore containment regime explodes onto the streets. , Bloomberg

(Bloomberg) -- China will hold a briefing with officials from various health bodies to discuss Covid prevention and control measures Tuesday, as protests against the country’s zero-tolerance Covid approach fuel speculation the government needs to change course.

China holds briefings on its virus response on an almost weekly basis, and they’re typically used by officials to reiterate the government’s line on Covid Zero. The last time a briefing with a similar lineup of officials was held was a week ago, when health official Hu Xiang said China was sticking with its approach as the current Covid outbreak was “severe and complex.” Speakers urged Chinese officials to implement the new 20 guidelines for containing the virus, and said there is a pressing need for more medical resources.

Rumors China may be preparing a big announcement on the fate of Covid Zero fueled gains in stocks tied to reopening Tuesday, with markets already buoyed by steps to support the property sector.

They are sometimes used to announce more incremental news, but rarely, if ever, has a significant change been announced in this forum, given the status of the officials. The briefings are more often held after big shifts, which are usually announced via state media, are unveiled -- such as the 20 measures -- and give officials a chance to unpack the broader decision and its implications.

Shortly after the 20 steps were announced, the NHC hosted a briefing where they emphasized that the playbook overhaul was a refinement of the existing approach, not a relaxation of controls.

A few days later, representatives of the health agencies vowed to strengthen China’s hospital network to more effectively treat Covid patients, comments that were seen as a sign that bureaucrats were looking at how the country may deal with a higher caseload if it allowed more virus to circulate or fully reopened.