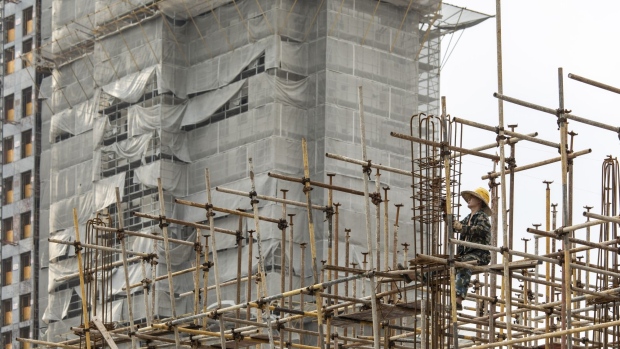 A worker labors on scaffolding at an under construction residential housing development in Shanghai, China, on Thursday, July 29, 2021. Chinese policy-making bodies collectively issued a three-year timeline for bringing “order” to the property sector, long under scrutiny due to an excessive buildup of leverage among home-buyers and developers. Photographer: Qilai Shen/Bloomberg , Bloomberg

(Bloomberg) -- China’s home-price growth weakened for a third month in August, signaling that restrictions in the housing sector and an escalating crisis at the country’s most indebted developer are hurting buyer sentiment.

New-home prices in 70 cities, excluding state-subsidized housing, rose 0.16% last month from July, the slowest pace this year, National Bureau of Statistics figures showed Wednesday. Values in the secondary market dropped for the first time since February last year, down 0.02% from a month earlier.

Softness in the home market is becoming more evident as regulators’ efforts to curb the real estate sector coincide with a worsening cash crunch at China Evergrande Group. Higher mortgage rates, tighter rules for home purchases, and measures to curtail excess borrowing by developers have all weighed on the market.

Authorities haven’t shown signs of easing up on the industry, with Vice Premier Han Zheng saying in July that the property sector shouldn’t be used as a short-term boost for the economy. Residential sales dropped for the first time in almost seven years that month, according to Bloomberg calculations based on official data.

“Tightening over the real estate sector has been unprecedented recently, and it’s clearly had an impact,” Song Hongwei, a research director at Tospur Real Estate Consulting Co., said before the figures were released. “More developers are resorting to price cuts to recoup cash, as it becomes harder to get proceeds from mortgages and other fundraising methods.”

Confidence toward developers may weaken further after a spate of protests broke out at Evergrande offices across China in recent days, raising the specter of social unrest. Evergrande said Tuesday that it expects a “significant” drop in property sales in the normally buoyant month of September because of waning confidence among home buyers.

With more than $300 billion in liabilities, Evergrande has been slashing prices on apartments to raise cash. The group had received down payments on yet-to-be-completed properties from more than 1.5 million home buyers as of December.