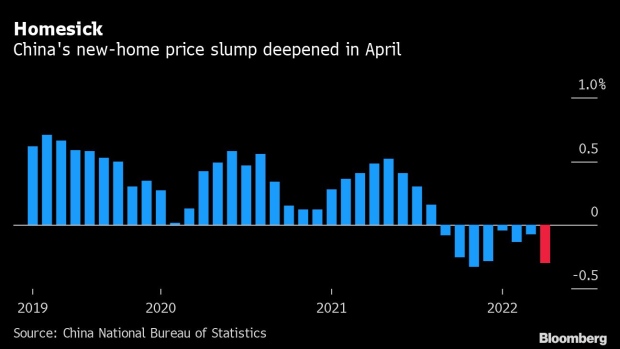 The deepening price slump is another blow to the embattled property sector, which has been hit by strict coronavirus lockdowns and a spreading liquidity crisis among developers. China’s government has vowed to support the housing market as part of efforts to halt a slowdown in the world’s second-largest economy.

A rise in uncertainty, a lack of confidence, an increase in the unemployment rate and falling income growth have all contributed to home market stress, Nomura Holdings Inc. economists led by Lu Ting wrote in a note earlier this week.

The central bank on Sunday made a rare cut to the minimum interest rate for first-time mortgages. Local authorities have offered a variety of housing incentives, including lowering down-payment requirements and even encouraging families with more children to own multiple properties.

Such measures have done little to arrest the housing slump, which has been exacerbated by the country’s severe response to the latest coronavirus wave. Home sales by value plunged 49% in April from a year earlier to the lowest level since late 2015, official figures showed Monday.

Shanghai, which is slowly emerging from a six-week lockdown, saw new-home prices fail to rise for the first time since November 2020. Across all the 70 cities monitored, values in the secondary market, which is subject to less government intervention, declined a wider 0.28% from a month earlier.

“Weak homebuyer confidence remains a key hurdle, while Covid’s spread adds near-term threats,” Bloomberg Intelligence analysts including Kristy Hung wrote in a note before the figures were released. “Sentiment may improve only with a turnaround in distressed developers’ liquidity, which looks unlikely in the near term without stronger policy support.”

(Updates with analyst comment in the fourth paragraph, Shanghai details in the eighth)