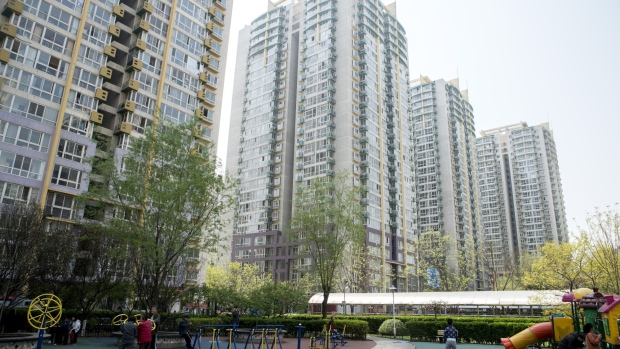 People stand in a playground in front of residential buildings in the Shuangjing area of Beijing, China, on Monday, April 16, 2018. New home prices in Beijing and Shanghai have jump more than 25 percent over the last two years. Photographer: Giulia Marchi/Bloomberg , Bloomberg

(Bloomberg) -- Home sales in China have been dealt a huge blow by the spreading coronavirus with figures showing transactions plunged in the first week of February.

New apartment sales dropped 90% from the same period of 2019, according to preliminary data on 36 cities compiled by China Merchants Securities Co. Sales of existing homes plummeted 91% in eight cities where data is available.

“The sector is bracing for a worse impact than the 2003 SARS pandemic,” said Bai Yanjun, an analyst at property-consulting firm China Index Holdings Ltd. “In 2003, the home market was on a cyclical rise. Now, it’s already reeling from an adjustment.”

While many manufacturing, financial and retail companies got back to work this week, property developers remain largely closed for business. While people can still buy an apartment online, showrooms across more than 100 cities are shut to minimize human-to-human contact.

Shenzhen, now considered a potential new infection hot spot, banned home sales in every possible form for as long as city authorities have the alert level set at the highest response. Zhengzhou, a metropolis on the Yellow River in central Henan province, has restricted all property construction until mid-March.

In the capital Beijing, fewer than four units a day were sold last week, according to E-House China Enterprise Holdings Ltd.’s research institute. Usually, transactions number in the hundreds.

Even if such rules weren’t in place, there may not be many buyers anyway. Most cities have severely restricted the entrance and exit of people to limit the spread of the virus.

Demand may start picking up again in April, assuming the outbreak is largely under control by that point, China International Capital Corp. analyst Eric Zhang said. Still, if people’s incomes have also declined because they haven’t been at work, home-buying plans may be put on hold, China Index’s Bai said.

The downturn will challenge those developers with poor liquidity, even if the coronavirus only crimps sales for several months, S&P Global Ratings said in a note last week, without identifying any firms. Many count on steady cash flows from home sales as a liquidity lifeline, S&P said.

“For developers, the biggest challenge is the stress on short-term cash flow,” said Bai. “It’s manageable so far, but the situation may suddenly worsen.”