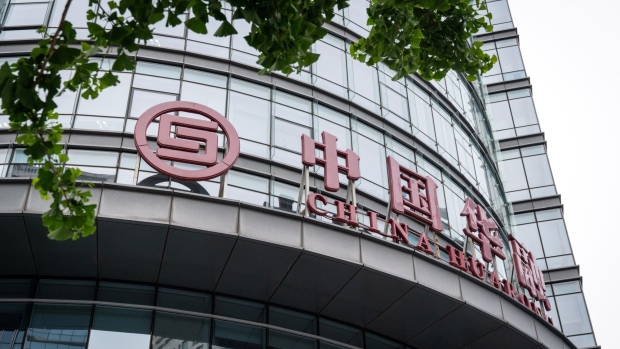 Signage on the China Huarong Asset Management Co. headquarters on Financial Street in Beijing, China, on Wednesday, May 19, 2021. Beijing aced its economic recovery from the pandemic largely via an expansion in credit and a state-aided construction boom that sucked in raw materials from across the planet. Photographer: Yan Cong/Bloomberg , Bloomberg

(Bloomberg) -- S&P Global Ratings continues to weigh a potential downgrade of China Huarong Asset Management Co., more than a month after peers cut their grades on the firm.

The credit risk assessor, which has Huarong three notches above junk territory at BBB+, is still awaiting clarity on the transaction which prompted Huarong to delay releasing 2020 results as well as the firm’s overall performance and government backing, S&P analysts wrote in a Wednesday report. Their base case remains that the company has “a very high likelihood of extraordinary government support.”

Moody’s Investors Service and Fitch Ratings downgraded Huarong in April, and also still have it on watch for further cuts, amid a lack of clarity over the extent of Beijing’s future support. S&P, the first of the trio to warn of a potential downgrade, has yet to make any ratings change.

Worries about the state-owned company’s financial health spread after it missed a deadline at the end of March for releasing its 2020 results. The ensuing drama has rattled investors and emerged as a key test for China’s vast, debt-ridden financial system.

It’s also effectively shut out Huarong from overseas public debt markets. That’s compounded refinancing concerns given the company has $21.7 billion in outstanding dollar bonds, $3.4 billion of which matures through the end of this year, data-compiled by Bloomberg shows. That includes a $900 million note maturing Thursday, which Bloomberg reported has been repaid.

Huarong has continued meeting it onshore and offshore debt payments since concerns first flared at the end of March.

The firm broke its silence over its financial position in late April, with a company executive telling media that it was prepared to make its bond payments and state backing remained intact. The downgrades by overseas raters “have no factual basis” and are “too pessimistic,” Xu Yongli, Huarong’s vice president and board secretary, said in an interview with the state-run Shanghai Securities News.

The borrower has reached funding agreements with state-owned banks to ensure it can repay debt through at least the end of August, by which time the company aims to have completed its 2020 financial statements, people familiar with the matter said in May.

Worries about Huarong have spread to some of the company’s onshore bonds in recent weeks amid a spate of news reports that prompted uncertainty about potential losses for bondholders. Contagion risks have also resurfaced among the dollar bonds of China’s other major bad-debt managers.